The biggest bill ever for NOTHING:

The elite is after your money and your freedom (and I told you so). 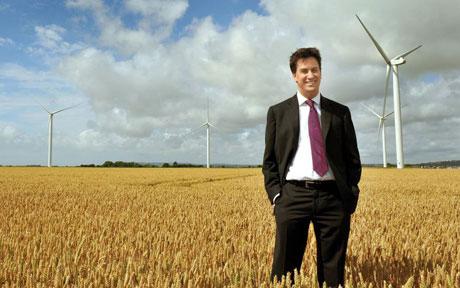 The Energy Minister, Ed Miliband, at the opening of a wind farm Photo: PA

One of the best-kept secrets of British politics – although it is there for all to see on a Government website – is the cost of what is by far the most expensive piece of legislation ever put through Parliament. Every year between now and 2050, acccording to Ed Miliband’s Department for Energy and Climate Change (Decc), the Climate Change Act is to cost us all up to £18.3 billion – £760 for every household in the country – as we reduce our carbon emissions by 80 per cent.

Last Thursday – with northern Britain again under piles of global warming – another tranche of regulations came into force, as this measure begins to take effect. New road tax rules mean that to put a larger, more CO2 -emitting car on the road will now cost £950. New “feed-in” subsidies for small-scale “renewables” mean that the installers of solar panels will be paid up to eight times the going rate for their miserable amount of electricity to be fed into the grid, with the overall bill for this scheme estimated eventually to be billions a year.

Not the least bizarre of the Government’s strategies, however, is Decc’s new Carbon Reduction Commitment (CRC) scheme, requiring up to 30,000 of our largest energy users, such as ministries, councils, universities, hospitals, supermarket chains (and even “monasteries and nunneries”), to pay to register with the Environment Agency. Some 5,000 of them, using more than “6,000 megawatt hours” of electricity each year (equivalent to the needs of 1,250 homes), will then have to carry out a cumbersome audit of their carbon footprint, using “three different metrics”, in order to pay £12 for each ton of CO2 they emit – at a total initial cost estimated at £1.4 billion a year. This will eventually be contributed by all of us, either through taxes or, for instance, whenever we visit Tesco.

Even the 25,000 remaining non-participants in the scheme will still have to pay, between them, some £9.75 million to register with the Environment Agency, doubtless so they can be brought into the net at a later date. Meanwhile, as indicated by Decc’s 100-page Carbon User’s Guide, the “carbon efficiency” performance of the 5,000 participants will place them in an annual league table, with the worst performers having to pay cash penalties, to be given as bonuses to those at the top.

In return for the millions paid to the agency in registration and annual “subsistence” fees, it is hiring an army of officials to carry out audits, to ensure that no one is cheating. Anyone who incorrectly records emissions or fails to submit the stacks of necessary documentation in time will be fined £5,000 plus £500 a day, doubled after 40 days, with unlimited fines or up to two years in jail for more serious offences.

Recent studies show that, even though the first stage of this unbelievably complex scheme came into force on April Fools’ Day, more than half the enterprises liable to sign up are not yet aware of what is required of them – so the Government could be looking forward to a huge additional income from those fines.

Once the scheme is established, of course, the idea is that, in future, the total amount of CO2 emitted will be capped, pushing the cost of each ton of CO2 even higher. All this and much more, such as the £100 billion the Government wants to see spent on useless wind farms, is designed to reduce Britain’s CO2 emissions within 40 years to where they were in the early 19th century.

Since we contribute less than 2 per cent of global emissions, while China continues to build a new coal-fired power station every week, these empty getures will do nothing to reduce the world’s overall “carbon footprint”. Not that this makes any difference to global warming anyway – but at least it will give the Government billions more pounds of our money, while we still have any of it left.