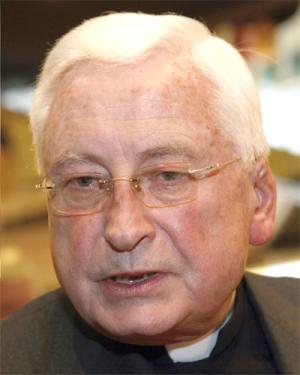 The child abuse scandal rocking the Vatican grew yet again Wednesday when former children in a German orphanage submitted written statements that a German bishop habitually beat them.

The Bishop of Augsburg, Walter Mixa, was a controversial conservative churchman appointed by Pope Benedict in 2005 and has been called his friend.

According to the statement, Mixa used to hit and degrade the children repeatedly during sessions of punishment at the Catholic orphanage. Among other details, Mixa is accused of using a carpet beater on the bare behinds of victims as he screamed: ‘Satan is in you and I must drive him out.’

A controversial figure in the Catholic church, Mixa previously explained that the liberation movement deserved a ‘significant’ part of the blame for pedophilia scandals in the church.

Hildegard Sedlmair, now 48, said she was beaten by the German bishop when she was 15.

“I was really upset when the pope appointed him Bishop because he was much lower in rank then and doesn’t deserve to be where he is because of what he put us through,” she said. “He grabbed me by my smock, hauled me out of bed and beat me on the upper arms until they were black and blue.”

She said the time spent at the orphanage ‘was the worst of my life’.

A man who didn’t identify himself told Germany’s Sueddeutsche newspaper: ‘A minimum of 50 times in one year he made me drop my trousers and beat me on my behind with a carpet beater or a stick, really, really hard.’ He was allegedly at the home between 1972 to 1982.

According to the statements, it wasn’t just Bishop Mixa who dished plenty of corporal punishment. The nuns also hit the children with ‘wooden brooms, wooden shoes, and clothing hangers,’ the statement said.

Mixa was friendly with then Cardinal Ratzinger in Germany years ago. He is now part of a conservative group that backed several of the Pope’s more controversial decisions.

A spokeswoman for the Bishopric of Augsburg said the statements were “absurd.”

“At no time and in none of his functions has Bishop Mixa ever maltreated children. [These allegations] are absurd, untrue, and evidently concocted with the aim of personally discrediting the bishop,” said spokeswoman Kathi Marie Ulrich.