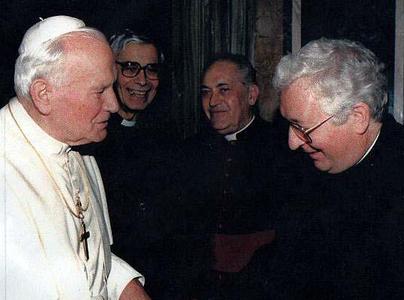 An Ontario victim of a pedophile priest who later became a top Vatican official says the Vatican knew of allegations against the priest years before he was convicted.

The priest, former Monsignor Bernard Prince, was convicted in 2008 of molesting 13 young boys between 1964 and 1984. Most of the incidents occurred in the Killaloe area, near Pembroke in eastern Ontario. He was defrocked last year.

Prince was appointed to a top Vatican job in Rome in 1991 – the year after the Roman Catholic Diocese of Pembroke learned of sex abuse allegations – says the victim, who can’t be identified because of a court publication ban on identifying him. The victim says in 1993 the Apostolic Nunciature in Ottawa – the Vatican’s embassy – was notified of the allegations.

Yet Prince remained secretary general of the Vatican’s Pontifical Society for the Propagation of the Faith until his retirement in 2004.

“The Apostolic Nuncio in Ottawa was aware of the allegations,” says the victim, referring to the Vatican’s ambassador at the time, Archbishop Carlo Curis.

“They did nothing about it,” the victim alleges, referring to Vatican officials. “In fact, they just continued to cover him up.”

The victim, now 53, is one of several who have filed civil lawsuits seeking damages against Prince and the diocese of Pembroke.

Questions surrounding the Vatican’s treatment of Prince – now serving a four-year prison sentence in British Columbia – come as the Roman Catholic Church is facing a wave of sex abuse scandals in Ireland, Germany, Austria, Switzerland and the Netherlands.

Pope Benedict XVI is also under fire. Documents obtained by The New York Times indicate the Vatican office he headed when he was Cardinal Joseph Ratzinger refused to discipline a U.S. priest accused of molesting some 200 deaf boys.

Ratzinger led the Vatican’s Congregation for the Doctrine of the Faith from 1981 until 2005, when he was elected Pope. Part of his role was deciding what to do with abusive priests.

It has also emerged that Ratzinger, while archbishop of Munich in 1980, approved the transfer of a priest accused of pedophilia for psychiatric treatment, rather than report him to police.

Ratzinger was later notified the priest had been reassigned to another parish, according to a memo cited by The New York Times on Friday. The priest was eventually convicted of molesting boys.

A Vatican statement Friday again insisted that Ratzinger did not know that the German priest had been reassigned to another parish. A Vatican newspaper editorial described attacks against the Pope as “ignoble,” insisting there was never a cover-up of allegations of clerical sex abuse.

In Ontario, Robert Talach, the London-based lawyer for Prince’s victim, wants the Vatican to come clean: “What did the Vatican know, and did that factor into how they treated (Prince) when he got to Rome?” he asked.

Talach has filed 14 separate civil lawsuits against Prince and the Pembroke diocese. He says six have been resolved. The remaining lawsuits each demand $2 million in damages.

The diocese’s lawyer, Charles Gibson, acknowledges that allegations of sex abuse against Prince were made before he was transferred to the Vatican job in Rome, but denies a cover-up took place.

“The fact that he went to Rome had nothing to do with the fact that there was an allegation of sexual abuse against him,” says Gibson, making clear that the transfer was not the Church’s way of helping Prince duck the allegations.

Asked if the diocese had informed the Vatican’s embassy of the sex abuse allegations against Prince, Gibson says: “I have to check it out, but I think that’s true.”

Gibson never got back to the Star with the information, despite two further reminders.

The Vatican’s embassy in Ottawa did not respond to a request for an interview on the matter.

An embassy employee asked the Star to email Monsignor Luca Lorusso, an official at the embassy. He did not respond to a message outlining the Prince case and asking about steps the embassy took once it was informed.

Talach says civil law does not permit him to say whether he has documents proving the diocese notified the Vatican embassy. Documents can be made public only after they’ve been filed with the court, he notes.

Pembroke Bishop Michael Mulhall did not reply to requests for interviews. The diocese’s spokesman, Bruce Pappin, said Thursday he would try to confirm whether the sex allegations were passed on to the Vatican’s embassy. Late Friday afternoon, he said he was unable to do so.

In an earlier interview, Pappin said one difficulty in getting information is that almost all the diocese officials who dealt directly with the sex abuse allegations have since died.

One who is still alive is Rev. John Green, now at a Pembroke nursing home. Green says he first heard of the allegations when the girlfriend of the victim interviewed by the Star brought it to his attention in 1990.

Asked if the information was passed on to the Vatican, Green says: “I would think that that would be the appropriate thing to do.”

Talach has almost 100 clients alleging sexual abuse by priests in Ontario and the Maritimes. The incidents span from the late 1950s to the early 1980s.

The way bishops in almost all cases reacted, Talach says, suggests a Church-wide policy: “Stop the spread of the information, move the perpetrator, and with some sort of religious duress, at least, make your best effort to keep the victims and the family quiet, and back to business as usual.”

Talach represented 11 of the 13 men Prince was convicted of abusing as young boys.

Prince was ordained at the Pembroke diocese in 1963. Pappin says he stopped working there in 1967. He was an assistant general secretary for the Canadian Conference of Bishops in the early 1970s. He then taught at Saint Paul University before moving to Toronto as director of Canada’s Pontifical Mission Society.

“He was a rising star,” Pappin says.

He was promoted to the Vatican job in 1991 and became a friend of the late Pope John Paul II.

He became a monsignor during the time he was at the Vatican, says the victim, who helps run a website about Prince.

“Is that standard procedure – you promote someone who has allegations of sexual abuse against him?” the victim asks.

The victim says he had six meetings with officials of the Pembroke diocese after Prince went to Rome. He said he decided not to press charges on condition that Prince receive psychiatric treatment and be monitored. Church officials assured him that was happening, the victim says.

The victim, who lives in Killaloe, then met a friend who told him she saw Prince vacationing in Thailand. The victim then confronted church officials: “You’re not monitoring him at all,” he says he told them. They responded: “We don’t really have any control over what is going on in the Vatican,” he recalls.

A bench warrant was issued for Prince in October 2005, while he was still living in Rome. He was arrested when he returned to Canada in 2006.

At his trial in 2008, Prince, then 72, pleaded guilty to 12 charges of indecent or sexual assault. He was found guilty on a 13th charge of indecent assault.

“My abuse started when I was 8 and it went on until I was 15,” the Killaloe victim says. “He was a family friend, plus I was an altar boy.

He applauds Pope Benedict XVI for being the first pope to meet with victims of sexual abuse by priests.

However, the victim adds: “He says all the right things, but there is zero follow-up. It’s all, `Oh, we feel for your pain.’ No you don’t, because you’re not doing anything about it.

“There’s rot in the system.”