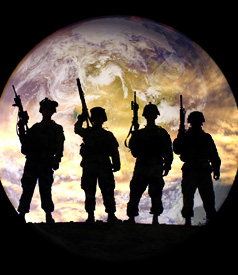 Here is news of the Third World War. The United States has invaded Africa. US troops have entered Somalia, extending their war front from Afghanistan and Pakistan to Yemen and, now, the Horn of Africa. In preparation for an attack on Iran, American missiles have been placed in four Persian Gulf states, and “bunker-buster” bombs are said to be arriving at the US base on the British island of Diego Garcia in the Indian Ocean.

In Gaza, the sick and abandoned population, mostly children, is being entombed behind underground American-supplied walls in order to reinforce a criminal siege. In Latin America, the Obama administration has secured seven bases in Colombia, from which to wage a war of attrition against the popular democracies in Venezuela, Bolivia, Ecuador and Paraguay. Meanwhile, the Secretary of “Defense” Robert Gates complains that “the general [European] public and the political class” are so opposed to war they are an “impediment” to peace. Remember this is the month of the March hare.

According to an American general, the invasion and occupation of Afghanistan is not so much a real war as a “war of perception.” Thus, the recent “liberation of the city of Marja” from the Taliban’s “command and control structure” was pure Hollywood. Marja is not a city; there was no Taliban command and control. The heroic liberators killed the usual civilians, poorest of the poor. Otherwise, it was fake. A war of perception is meant to provide fake news for the folks back home, to make a failed colonial adventure seem worthwhile and patriotic, as if “The Hurt Locker” were real, and parades of flag-wrapped coffins through the Wiltshire town of Wooten Basset were not a cynical propaganda exercise.

“War is fun,” the helmets in Vietnam used to say with bleakest irony, meaning that if a war is revealed as having no purpose other than to justify voracious power in the cause of lucrative fanaticisms, such as the weapons industry, the danger of truth beckons. This danger can be illustrated by the liberal perception of Tony Blair in 1997 as one “who wants to create a world [where] ideology has surrendered entirely to values” (Hugo Young, the Guardian) compared with today’s public reckoning of a liar and war criminal.

Western war states such as the US and Britain are not threatened by the Taliban or any other introverted tribesmen in faraway places, but by the antiwar instincts of their own citizens. Consider the draconian sentences handed down in London to scores of young people who protested Israel’s assault on Gaza in January last year. Following demonstrations in which paramilitary police “kettled” (corralled) thousands, first-offenders have received two and a half years in prison for minor offences that would not normally carry custodial sentences. On both sides of the Atlantic, serious dissent exposing illegal war has become a serious crime.

Silence in other high places allows this moral travesty. Across the arts, literature, journalism and the law, liberal elites, having hurried away from the debris of Blair and, now, Obama, continue to fudge their indifference to the barbarism and aims of Western state crimes by promoting retrospectively the evils of their convenient demons, like Saddam Hussein. With Harold Pinter gone, try compiling a list of famous writers, artists and advocates whose principles are not consumed by the “market” or neutered by their celebrity. Who among them have spoken out about the holocaust in Iraq during almost 20 years of lethal blockade and assault? And all of it has been deliberate. On January 22, 1991, the US defense Intelligence Agency predicted in impressive detail how a blockade would systematically destroy Iraq’s clean water system and lead to “increased incidences, if not epidemics of disease.” So, the US set about eliminating clean water for the Iraqi population: one of the causes, noted UNICEF, of the deaths of half a million Iraqi infants under the age of five. But this extremism apparently has no name.

Norman Mailer once said he believed the United States, in its endless pursuit of war and domination, had entered a “pre-fascist era.” Mailer seemed tentative, as if trying to warn about something even he could not quite define. “Fascism” is not right, for it invokes lazy historical precedents, conjuring yet again the iconography of German and Italian repression. On the other hand, American authoritarianism, as the cultural critic Henry Giroux pointed out recently, is “more nuance, less theatrical, more cunning, less concerned with repressive modes of control than with manipulative modes of consent.”

This is Americanism, the only predatory ideology to deny that it is an ideology. The rise of tentacular corporations that are dictatorships in their own right and of a military that is now a state with the state, set behind the façade of the best democracy 35,000 Washington lobbyists can buy, and a popular culture programmed to divert and stultify, is without precedent. More nuanced perhaps, but the results are both unambiguous and familiar. Denis Halliday and Hans von Sponeck, the senior United Nations officials in Iraq during the American and British-led blockade, are in no doubt they witnessed genocide. They saw no gas chambers. Insidious, undeclared, even presented wittily as enlightenment on the march, the Third World War and its genocide proceeded, human being by human being.

In the coming election campaign in Britain, the candidates will refer to this war only to laud “our boys.” The candidates are almost identical political mummies shrouded in the Union Jack and the Stars and Stripes. As Blair demonstrated a bit too eagerly, the British elite love America because America allows it to barrack and bomb the natives and call itself a “partner.” We should interrupt their fun.