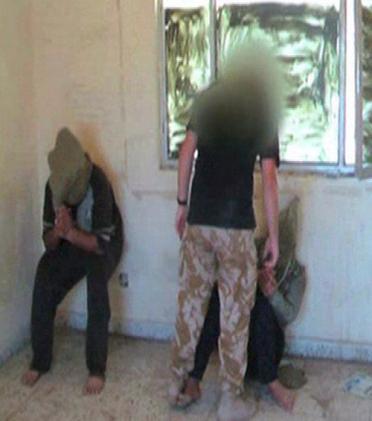 Iraqi prisoners were forced to stay in ‘stress positions’

Fresh evidence has emerged that British military intelligence ran a secret operation in Iraq which authorised degrading and unlawful treatment of prisoners. Documents reveal that prisoners were kept hooded for long periods in intense heat and deprived of sleep by defence intelligence officers. They also reveal that officers running the operation claimed to be answerable only “directly to London”.

The revelations will further embarrass the British government, which last month was forced to release documents showing it knew that UK resident and terror suspect Binyam Mohamed had been tortured in Pakistan.

The latest documents emerged during the inquiry into Baha Mousa, an Iraqi hotel worker beaten to death while in the custody of British troops in September 2003. The inquiry is looking into how interrogation techniques banned by the Government in 1972 and considered torture and degrading treatment were used again in Iraq.

Lawyers believe the new evidence supports suspicions that an intelligence unit – the Joint Forward Interrogation Team (JFIT) which operated in Iraq – used illegal “coercive techniques” and was not answerable to military commanders in Iraq, despite official denials it operated independently.

In a statement to the inquiry, Colonel Christopher Vernon said he raised concerns after seeing 30 to 40 prisoners in a kneeling position with sacks over their heads. He said those in charge said they were from the Defence and Intelligence Security Centre, based at Chicksands, Bedfordshire, the British Army’s intelligence HQ.

He was informed that “they were an independent unit and reported directly to their chain of command in London”. Hooding was “accepted practice” and would continue, he was told. “They reiterated the point they were an independent unit and did not come under the command of the GOC1 (UK) Armed Div (the Iraq command),” he said. Asked by the inquiry last week whether there was “some sort of feeling generally in the Army the intelligence people were slightly on their own and running their own show”, Col Vernon replied: “I think you could say that.”

In a second statement, Colonel David Frend, a British Army legal adviser in Iraq, said he was told by a senior military intelligence officer in London that “there was a legitimate reason for it [hooding], they had always done it and they would like to continue to do it.” Col Frend said: “My recollection is that he said that they – ie those at JFIT – had been trained to hood. My understanding from the conversation was simply the use of hessian sandbags as hoods were something that had been taught to members of the JFIT at some point prior to deployment [to Iraq] and that it was not a unilateral act by them.”

In a further email disclosed by the inquiry this week, Major Gavin Davies, a member of the Army’s legal team, wrote in March 2003: “I have just spoken to S002 [code for an army intelligence officer in Iraq] about the subject of placing [prisoners] in hoods in the UK facility.” He goes on to say that he was told that hooding is only until “high value” prisoners can be interviewed, and the length of hooding can last from an hour to 24 hours. The only other restriction, he wrote, “is that they may not sleep”. Sleep deprivation is considered torture.

Chicksands has always denied that it trained soldiers to use hoods, claiming that there may have been some confusion with its “conduct after capture” training programme.

However, a further email from a military legal officer based at Permanent Joint Headquarters in Northwood, also published last week, stated: “I have heard that Chicksands have denied teaching hooding and suggested that there may be confusion in the minds of those who have completed the conduct after capture course during which students are hooded. I find this implausible. The people I have spoken to are not stupid. It seems to me more likely that hooding is taught but for actions immediately on capture or for prisoner handling.”

In November, the human rights lawyer Phil Shiner, who represents Baha Mousa’s family and forced the public inquiry, lodged a further 14 cases of abuse, naming JFIT. This is the first time that evidence to support the claims from the British military has emerged. There are now 47 claims of abuse lodged against the Government.

Yesterday Mr Shiner said: “It’s been established that JFIT were a separate compound and their personnel were not accountable to a military chain of command. There is a mass of evidence from this and other cases which shows JFIT used coercive interrogation techniques – forbidden under law – as standard operating procedure. We need an independent inquiry to examine who was responsible.”

A MoD spokesman declined to comment while the inquiry was ongoing.