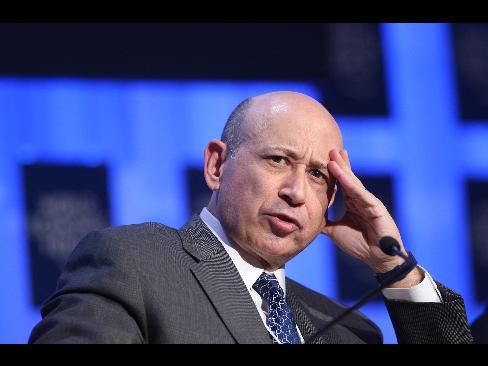 March 15 (Bloomberg) — Goldman Sachs Group Inc. and JPMorgan Chase & Co., two of the biggest traders of over-the- counter derivatives, are exploiting their growing clout in that market to secure cheap funding in addition to billions in revenue from the business.

Both New York-based banks are demanding unequal arrangements with hedge-fund firms, forcing them to post more cash collateral to offset risks on trades while putting up less on their own wagers. At the end of December this imbalance furnished Goldman Sachs with $110 billion, according to a filing. That’s money it can reinvest in higher-yielding assets.

“If you’re seen as a major player and you have a product that people can’t get elsewhere, you have the negotiating power,” said Richard Lindsey, a former director of market regulation at the U.S. Securities and Exchange Commission who ran the prime brokerage unit at Bear Stearns Cos. from 1999 to 2006. “Goldman and a handful of other banks are the places where people can get over-the-counter products today.”

The collapse of American International Group Inc. in 2008 was hastened by the insurer’s inability to meet $20 billion in collateral demands after its credit-default swaps lost value and its credit rating was lowered, Treasury Secretary Timothy F. Geithner, president of the Federal Reserve Bank of New York at the time of the bailout, testified on Jan. 27. Goldman Sachs was among AIG’s biggest counterparties.

Goldman Sachs Chief Financial Officer David Viniar has said that his firm’s stringent collateral agreements would have helped protect the firm against a default by AIG. Instead, a $182.3 billion taxpayer bailout of AIG ensured that Goldman Sachs and others were repaid in full.

Over the last three years, Goldman Sachs has extracted more collateral from counterparties in the $605 trillion over-the- counter derivatives markets, according to filings with the SEC.

The firm led by Chief Executive Officer Lloyd C. Blankfein collected cash collateral that represented 57 percent of outstanding over-the-counter derivatives assets as of December 2009, while it posted just 16 percent on liabilities, the firm said in a filing this month. That gap has widened from rates of 45 percent versus 18 percent in 2008 and 32 percent versus 19 percent in 2007, company filings show.

“That’s classic collateral arbitrage,” said Brad Hintz, an analyst at Sanford C. Bernstein & Co. in New York who previously worked as treasurer at Morgan Stanley and chief financial officer at Lehman Brothers Holdings Inc. “You always want to enter into something where you’re getting more collateral in than what you’re putting out.”

The banks get to use the cash collateral, said Robert Claassen, a Palo Alto, California-based partner in the corporate and capital markets practice at law firm Paul, Hastings, Janofsky & Walker LLP.

“They do have to pay interest on it, usually at the fed funds rate, but that’s a low rate,” Claassen said.

Goldman Sachs’s $110 billion net collateral balance in December was almost three times the amount it had attracted from depositors at its regulated bank subsidiaries. The collateral could earn the bank an annual return of $439 million, assuming it’s financed at the current fed funds effective rate of 0.15 percent and that half is reinvested at the same rate and half in two-year Treasury notes yielding 0.948 percent.

“We manage our collateral arrangements as part of our overall risk-management discipline and not as a driver of profits,” said Michael DuVally, a spokesman for Goldman Sachs. He said that Bloomberg’s estimates of the firm’s potential returns on collateral were “flawed” and declined to provide further explanation.

In 2008 the cash collateral received by JPMorgan made up 47 percent of derivative assets, while the amount posted was 37 percent of liabilities. The percentages were 47 percent and 26 percent in 2007, according to data in company filings.

By contrast, New York-based Citigroup Inc., a bank that’s 27 percent owned by the U.S. government, paid out $11 billion more in collateral on over-the-counter derivatives than it collected at the end of 2009, a company filing shows.

The five biggest U.S. commercial banks in the derivatives market — JPMorgan, Goldman Sachs, Bank of America Corp., Citigroup and Wells Fargo & Co. — account for 97 percent of the notional value of derivatives held in the banking industry, according to the Office of the Comptroller of the Currency.

In credit-default swaps, the world’s five biggest dealers are JPMorgan, Goldman Sachs, Morgan Stanley, Frankfurt-based Deutsche Bank AG and London-based Barclays Plc, according to a report by Deutsche Bank Research that cited the European Central Bank and filings with the SEC.

Goldman Sachs and JPMorgan had combined revenue of $29.1 billion from trading derivatives and cash securities in the first nine months of 2009, according to Federal Reserve reports.

The U.S. Congress is considering bills that would require more derivatives deals be processed through clearinghouses, privately owned third parties that guarantee transactions and keep track of collateral and margin. A clearinghouse that includes both banks and hedge funds would erode the banks’ collateral balances, said Kevin McPartland, a senior analyst at research firm Tabb Group in New York.

When contracts are negotiated between two parties, collateral arrangements are determined by the relative credit ratings of the two companies and other factors in the relationship, such as how much trading a fund does with a bank, McPartland said. When trades are cleared, the requirements have “nothing to do with credit so much as the mark-to-market value of your current net position.”

“Once you’re able to use a clearinghouse, presumably everyone’s on a level playing field,” he said.

Still, banks may maintain their advantage in parts of the market that aren’t standardized or liquid enough for clearing, McPartland said. JPMorgan CEO Jamie Dimon and Goldman Sachs’s Blankfein both told the Financial Crisis Inquiry Commission in January that they support central clearing for all standardized over-the-counter derivatives.

“The percentage of products that are suitable for central clearing is relatively small in comparison to the entire OTC derivatives market,” McPartland said.

A report this month by the New York-based International Swaps & Derivatives Association found that 84 percent of collateral agreements are bilateral, meaning collateral is exchanged in two directions.

Banks have an advantage in dealing with asset managers because they can require collateral when initiating a trade, sometimes amounting to as much as 20 percent of the notional value, said Craig Stein, a partner at law firm Schulte Roth & Zabel LLP in New York who represents hedge-fund clients.

JPMorgan’s filing shows that these initiation amounts provided the firm with about $11 billion of its $37.4 billion net collateral balance at the end of December, down from about $22 billion a year earlier and $17 billion at the end of 2007. Goldman Sachs doesn’t break out that category.

A bank’s net collateral balance doesn’t get included in its capital calculations and has to be held in liquid products because it can change quickly, according to an executive at one of the biggest U.S. banks who declined to be identified because he wasn’t authorized to speak publicly.

Counterparties demanding collateral helped speed the collapse of Bear Stearns and Lehman Brothers, according to a New York Fed report published in January. Those that had posted collateral with Lehman were often in the same position as unsecured creditors when they tried to recover funds from the bankrupt firm, the report said.

“When the collateral is posted to a derivatives dealer like Goldman or any of the others, those funds are not segregated, which means that the dealer bank gets to use them to finance itself,” said Darrell Duffie, a professor of finance at Stanford University in Palo Alto. “That’s all fine until a crisis comes along and counterparties pull back and the money that dealer banks thought they had disappears.”

While some hedge-fund firms have pushed for banks to put up more cash after the collapse of Lehman Brothers, Goldman Sachs and other survivors of the credit crisis have benefited from the drop in competition.

“When the crisis started developing, I definitely thought it was going to be an opportunity for our fund clients to make some headway in negotiating, and actually the exact opposite has happened,” said Schulte Roth’s Stein. “Post-financial crisis, I’ve definitely seen a greater push back on their side.”

Hedge-fund firms that don’t have the negotiating power to strike two-way collateral agreements with banks have more to gain from a clearinghouse than those that do, said Stein.

Regulators should encourage banks to post more collateral to their counterparties to lower the impact of a single bank’s failure, according to the January New York Fed report. Pressure from regulators and a move to greater use of clearinghouses may mean the banks’ advantage has peaked.

“Before the financial crisis, collateral was very unevenly demanded and somewhat insufficiently demanded,” Stanford’s Duffie said. A clearinghouse “should reduce the asymmetry and raise the total amount of collateral.”