– EXPLOSIVE: Lehman Corruption – Where Are The Cops? (Market Ticker)

The implosion of Lehman Brothers was in part triggered by excessive capital demands from JP Morgan Chase and Citigroup, and in part by the manipulation of its balance sheet by leading directors, a wide-ranging official report into the investment bank’s collapse has found. 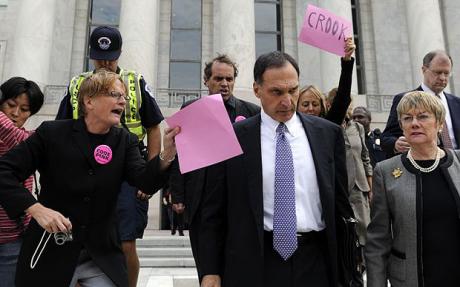 Dick Fuld, the former chief executive of Lehman, is criticised in the report which has taken a year to compile

In what is likely to kick-start a series of costly and long-running court cases, the exhaustive investigation found that the two Wall Street banks demanded significant amounts of capital and extra guarantees in the run-up to Lehman’s downfall – with JP Morgan Chase requesting $5bn (£3.3bn) just three days before Lehman’s bankruptcy filing.

• The use of accounting tactics designed to move $50bn from Lehman’s balance sheet.

• The work of auditor Ernst & Young.

Among Mr Valukas’s findings – which are designed to help the court and the bank’s trustees establish where there may be legal grounds for future claims – he asserts that the evidence “may support the existence of a . . .[valid] claim that JP Morgan breached the implied covenant of good faith and fair dealing by making excessive collateral requests” to Lehman.

“The demands for collateral by Lehman’s lenders had direct impact on Lehman’s liquidity pool,” he says.

Turning to the role of the bank’s directors, Mr Valukas argues that none of the board breached their fiduciary duties in the run-up to Lehman’s downfall. He found that while the directors should have exercised greater caution in decisions taken, they did not cross the line into “gross negligence”.

However, he does touch significantly on the role of what is known as “Repo 105” – essentially a set of accounting techniques which, all told, removed approximately $50bn of assets from the bank’s balance sheet for the two quarters before it collapsed.

“Lehman never publicly disclosed its use of Repo 105,” the report reads, even though Martin Kelly, the bank’s chief financial controller, raised the issue with Ms Callan and her successor Ian Lowitt.

The report also moves forward the long-running legal battle between Barclays – which bought the bulk of Lehman’s US brokerage assets days after it collapsed – and Lehman’s trustees. Mr Valukas found that a “limited amount of assets” belonging to Lehman were “improperly transferred to Barclays”. His comments provide extra weight behind Lehman’s trustees’ existing claim that Barclays received an $8bn “windfall” when it bought the assets, a trial over which is due to begin on April 26.

In addition, the report finds that there is enough evidence for a possible claim against Ernst & Young, Lehman’s auditor. The report, which was lodged with the court in February, was made public yesterday after Judge Peck agreed to it being unsealed.

Spokesmen for JP Morgan Chase, Barclays and Ernst & Young declined to comment or had not commented at the time of going to press. Citigroup said in an e-mailed statement that the bank is reviewing the report, and that a preliminary analysis shows the examiner “has not identified any wrongdoing on Citi’s part.”