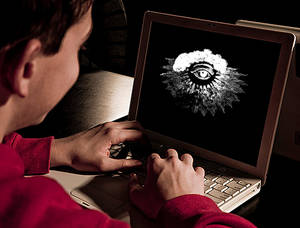 According to the filings in Blake J Robbins v Lower Merion School District (PA) et al, the laptops issued to high-school students in the well-heeled Philly suburb have webcams that can be covertly activated by the schools’ administrators, who have used this facility to spy on students and even their families.

The issue came to light when the Robbins’s child was disciplined for “improper behavior in his home” and the Vice Principal used a photo taken by the webcam as evidence. The suit is a class action, brought on behalf of all students issued with these machines.

If true, these allegations are about as creepy as they come. I don’t know about you, but I often have the laptop in the room while I’m getting dressed, having private discussions with my family, and so on. The idea that a school district would not only spy on its students’ clickstreams and emails (bad enough), but also use these machines as AV bugs is purely horrifying.

Schools are in an absolute panic about kids divulging too much online, worried about pedos and marketers and embarrassing photos that will haunt you when you run for office or apply for a job in 10 years. They tell kids to treat their personal details as though they were precious.

But when schools take that personal information, indiscriminately invading privacy (and, of course, punishing students who use proxies and other privacy tools to avoid official surveillance), they send a much more powerful message: your privacy is worthless and you shouldn’t try to protect it.