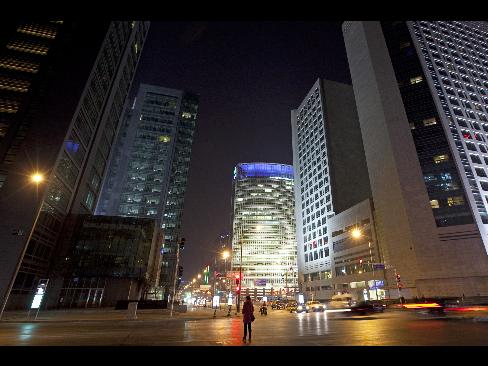 Feb. 12 (Bloomberg) — Jack Rodman, who has made a career of selling soured property loans from Los Angeles to Tokyo, sees a crash looming in China. He keeps a slide show on his computer of empty office buildings in Beijing, his home since 2002. The tally: 55, with another dozen candidates.

“I took these pictures to try to impress upon these people the massive amount of oversupply,” said Rodman, 63, president of Global Distressed Solutions LLC, which advises private equity and hedge funds on Chinese property and banking. Rodman figures about half of the city’s commercial space is vacant, more than was leased in Germany’s five biggest office markets in 2009.

Beijing’s office vacancy rate of 22.4 percent in the third quarter of last year was the ninth-highest of 103 markets tracked by CB Richard Ellis Group Inc., a real estate broker. Those figures don’t include many buildings about to open, such as the city’s tallest, the 6.6-billion yuan ($966 million) 74- story China World Tower 3.

Empty buildings are sprouting across China as companies with access to some of the $1.4 trillion in new loans last year build skyscrapers. Former Morgan Stanley chief Asia economist Andy Xie and hedge fund manager James Chanos say the country’s property market is in a bubble.

“There’s a monumental property bubble and fixed-asset investment bubble that China has underway right now,” Chanos said in a Jan. 25 Bloomberg Television interview. “And deflating that gently will be difficult at best.”

Investor concerns have spread beyond real estate. Among 15 major Asian markets, the benchmark Shanghai Composite Index is valued third-highest relative to estimates for this year’s earnings, after Japan and India, even after falling 8 percent this year.

A glut of factories in China is “wreaking far-reaching damage on the global economy,” stoking trade tensions and raising the risk of bad loans, the European Union Chamber of Commerce in China said in November.

More than 60 percent of investors surveyed by Bloomberg on Jan. 19 said they viewed China as a bubble, and three in 10 said it posed the greatest downside risk. The quarterly poll interviewed a random sample of 873 Bloomberg subscribers and had a margin of error of 3.3 percentage points.

Digesting the debt from a popped property bubble may slash bank lending and drag growth lower for years in an economy that Nomura Holdings Inc., Japan’s biggest brokerage, says will provide more than a third of world growth in 2010.

The risks are so great that a decade of little or no growth, as Japan experienced in the 1990s, can’t be dismissed, said Patrick Chovanec, an associate professor in the School of Economics and Management at Beijing’s Tsinghua University, ranked China’s top university by the Times newspaper in London.

The Nikkei 225 Stock Average surged sixfold and commercial property prices in metropolitan Tokyo rose fourfold before the bubble burst in 1990. The Nikkei trades at about a quarter of its December 1989 peak.

“You have state-owned enterprises using borrowed funds from the stimulus bidding up the price of land — not even desirable plots of land — in Beijing to astronomical rates,” Chovanec said. “At the same time you have 30 percent-plus vacancy rates and slumping rents in commercial property so it’s just a case of when you recognize the losses — or don’t.”

China’s lending surged to 1.39 trillion yuan in January, more than in the previous three months combined. Property prices in 70 cities climbed 9.5 percent from a year earlier, the most in 21 months.

Policy makers are starting to rein in the loans that helped fuel the property boom. Banks should “strictly” follow real estate lending policies, the China Banking Regulatory Commission said on its Web site on Jan. 27. It called for banks to “reasonably control” lending growth.

The People’s Bank of China today ordered banks to set aside more deposits as reserves for the second time in a month to help cool expansion in lending. The requirement will increase 50 basis points effective Feb. 25, the central bank said on its Web site. The current level is 16 percent for big banks and 14 percent for smaller ones.

“The liquidity bubble last year went to the property market,” said Taizo Ishida, San Francisco-based lead manager for the $212-million Matthews Asia Pacific Fund, in a phone interview. “I was in Shanghai and Shenzhen three weeks ago and the prices were just eye-popping, just really amazing. Generally I’m not buying Chinese stocks.”

Chanos, founder of New York-based Kynikos Associates Ltd., predicted that China could be “Dubai times 100 or 1,000.” Real estate prices there have fallen almost 50 percent from their 2008 peak as the emirate struggles under at least $80 billion of debt. The economy may shrink 0.4 percent this year, Shuaa Capital, the biggest U.A.E. investment bank, says.

The commercial property space under construction in China at the end of November was the equivalent of 6,800 Burj Khalifas — the 160-story Dubai skyscraper that’s the world’s tallest.

It’s difficult to determine how exposed Chinese banks are to real estate debt because loans booked to some state-owned companies as industrial lending may have been used to invest in property, say Xie and Charlene Chu, who analyzes Chinese banks for London-based Fitch Ratings Ltd. in Beijing.

A drop in the property market may be accompanied by a surge in nonperforming loans. The Shanghai office of the banking regulatory commission said on Feb. 4 that a 10 percent fall in property values would triple the ratio of delinquent mortgages there.

Fund manager Joseph Zeng says he has a contrarian view on China’s banks, on the grounds that rising interest rates this year will benefit their net interest margins.

“For us, non-performing loans are not expected to be a big issue until 2013, the peak of the current economic cycle,” said Zeng, head of Greenwoods Asset Management Ltd.’s Hong Kong office, in a phone interview. He declined to say what he is buying. Greenwoods has more than $500 million under management.

China has firepower to deal with a crisis. The nation has the world’s largest foreign exchange reserves, at $2.4 trillion, and government debt of only about 20 percent of GDP last year, according to the International Monetary Fund. That compares with 85 percent in India and the U.S. and 219 percent in Japan.

CB Richard Ellis doesn’t count empty office buildings bought by banks and insurance companies when calculating vacancy rates, since some of the space is for the owners’ use. The Los Angeles-based company said in a report that vacancy rates are starting to fall and rents to rise for the best office buildings as China’s fast economic growth buoys demand.

Gross domestic product expanded 10.7 percent in the fourth quarter from a year before, a two-year-high, after the government introduced a $586-billion stimulus package.

“In many cases when you look at these buildings and say, that’s never going to be fully occupied, somehow 12 to 18 months later the building is full,” said Chris Brooke, CB Richard Ellis’s Beijing-based president and chief executive officer for Asia.

Overcapacity may be looming in manufacturing as well. China’s investments in new factories and properties surged 67 percent last year to 15.2 trillion yuan, more than Russia’s gross domestic product. Excess steel capacity may have reached about 132 million tons in 2009, more than the 87.5 million tons from Japan, the world’s second-biggest producer. The Beijing- based EU Chamber of Commerce report said a “looming deluge” of extra cement capacity is being built.

While neither Xie nor Chu see nonperforming loan ratios reaching the level of a decade ago, when they made up 40 percent of total lending, they say banks will see deterioration in their balance sheets.

Rodman displays the slide show to private equity and hedge fund clients brought in by banks such as Goldman Sachs Group Inc. at his office in eastern Beijing.

“China is the only place in the world that despite having more empty buildings than the rest of the world has yet to reflect those valuations on their balance sheet,” Rodman said.

Gazing south from the building that houses the Beijing headquarters of Goldman Sachs, UBS AG and JPMorgan Chase & Co., one of the first structures in the field of vision is a 17-story office tower at No. 9 Financial Street. Empty.

Farther along are the two 18-story towers of the Bank of Communications Co. complex. Dirt is gathering at the doors and the lobby is now a bicycle parking lot. A spokeswoman for the Shanghai-based lender didn’t return phone calls and e-mails.

The city government is driving growth regardless of the market. Financial Street Holding Co., whose biggest shareholder is the local municipal district, plans to build 1 million square meters of additional office space starting this year, and is talking to potential clients such as JPMorgan, said Lydia Wang, the company’s head of investor relations.

Across town, the district government is seeking to double the size of the city’s Central Business District, which already has the highest vacancy rate ever recorded in Beijing. It was 35 percent at the end of 2009, according to Jones Lang LaSalle.

For its part, Beijing-based Financial Street Holdings has “100 percent” of its properties, which include the Ritz Carlton hotel and a shopping mall, rented out, Wang said. The empty buildings along Finance Street don’t belong to the company, which is 26.6 percent owned by the district government.

Zhong Rongming, deputy general manager of the Beijing- based China World Trade Center Co., which built China World Tower 3, said the company is “optimistic about 2010 prospects” given China’s accelerating economic growth. He said the new tower will include tenants such as Mitsui & Co. and the Asian Development Bank.

One new addition to Finance Street may give real estate boosters cause for concern. No. 8 Finance Street will be the headquarters for China Huarong Asset Management Corp.