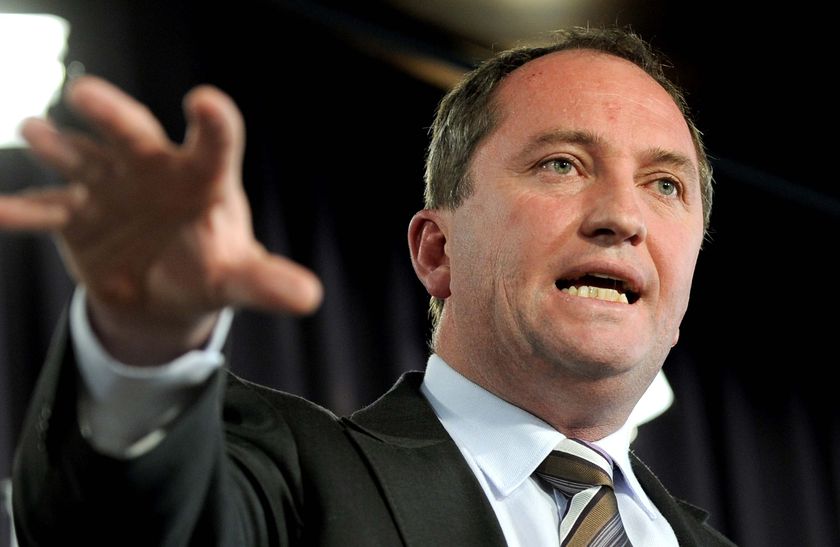 Opposition finance spokesman Barnaby Joyce is courting controversy again, warning that Australia is getting to the point where it will not be able to repay its overseas debt.

Senator Joyce says the Federal Government is borrowing billions of dollars from overseas to fund stimulus spending and programs like the National Broadband Network.

And he has questioned whether the Government is in a position to repay those loans.

“We’re going into hock to our eyeballs to people overseas,” he said.

“You’ve got to ask the question: how far into debt do you want to go? We are getting to a point where we can’t repay it.

“Let’s look at exactly what they’re doing now and ask this very simple question: are you paying back your money, are you even meeting your interest component, and can you keep the debt stable?

“Or is the debt racing ahead by more than even the interest expense? And if it is, any household budget will tell you that’s a very dangerous place to be.”

Senator Joyce has already been attacked by Labor for suggesting the states are close to being unable to repay their debts.

He says Australia’s public debt levels are among the lowest in the developed world and the Government has a plan to pay off the debt in just over a decade.

“Barnaby Joyce’s comments again today show he is totally unfit for any kind of position of economic responsibility in this country,” he said.

“They are totally ridiculous and grossly irresponsible.”

Prime Minister Kevin Rudd said the remarks showed that Senator Joyce would be a risk to the economy if he was installed as finance minister.

“This is a most fundamentally irresponsible remark by someone who puts himself forward as the alternative finance minister of Australia, a man put in that position by a leader of the Opposition who says he has no interest in economics whatsoever,” said Mr Rudd.

“So you ask sometimes about risk for the future, risk to the economy. Risk is here personified in an alternative finance minister who thinks you can play fast and loose with public language on Australia’s sovereign debt.”