Bush and Blair knew that the war was illegal and that Iraq did not have any WMD’s!

In case you want to know one reason why the ‘real terrorists’ invaded Afghanistan, then read this:

Almost the entire US government is bought and paid for.

Here is a short video of a speech given by a military soldier explaining the simple truth as to why we are actually in Iraq.

Why are we at war?

It matters not how many die, as long as the warmongers make a profit on it.

Inquiring minds are noting increasing resentment against US militarism in places some might least expect. Please consider Thousands protest in Tokyo against U.S. military presence in Japan

Thousands of protesters from across Japan marched today in Tokyo to protest against U.S. military presence on Okinawa, while a Cabinet minister said she would fight to get rid of a marine base Washington considers crucial. 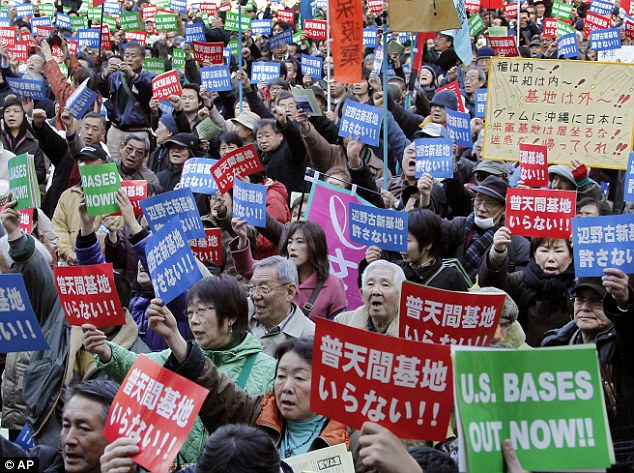 Some 47,000 U.S. troops are stationed in Japan, with more than half on the southern island of Okinawa. Residents have complained for years about noise, pollution and crime around the bases.

Japan and the U.S. signed a pact in 2006 that called for the realignment of American troops in the country and for a Marine base on the island to be moved to a less populated area.

But the new Tokyo government is re-examining the deal, caught between public opposition to American troops and its crucial military alliance with Washington.

On Saturday, labor unionists, pacifists, environmentalists and students marched through central Tokyo, yelling slogans and calling for an end to the U.S. troop presence.

They gathered for a rally at a park – under a banner that read ‘Change! Japan-U.S. Relations’ – for speeches by civil leaders and politicians.

Prime Minister Yukio Hatoyama has repeatedly postponed his decision on the pact, with members of his own government divided on how to proceed.

over the next few months we must put all of our energy into achieving victory,’ Cabinet minister Mizuho Fukushima said at the rally, to shouts of approval from the crowd.

Given that the US can no longer afford to be the world’s policeman, this is an extremely welcome event. Let’s hope it spreads.

Germany, Turkey, Philippines, and all 150 countries where US troops are stationed, please do us, yourselves, and the world a favor by kicking US troops out.