News reports said a volley of missile strikes from US drones killed 16 alleged militants in Pakistan on Tuesday. The use of drones to assassinate Taliban and Al Qaeda leaders in Pakistan has soared under President Barack Obama. 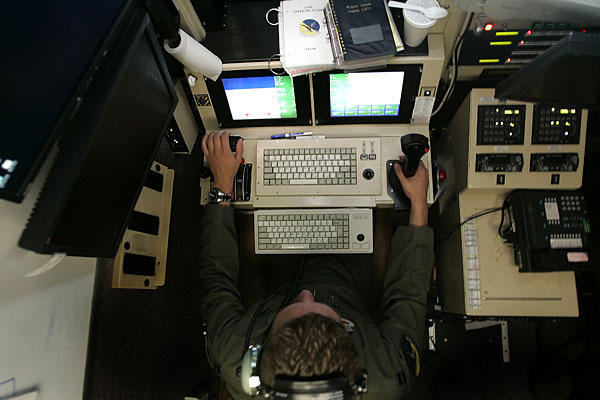 Several US unmanned aerial vehicles, or drones, fired a volley of missiles at houses in a village in Pakistan’s northwest on Tuesday and killed roughly 16 alleged Taliban militants, news agencies reported. Information on civilian casualties, if any, was not immediately available.

Agence France-Presse cited an unidentified Pakistani security official as saying that about 18 US missiles were fired at targets in the village of Dattakhel. Earlier news reports put the death toll at about 10. A later report by CNN claimed 29 killed.

The attack is just the latest confirmation of the commitment President Barack Obama has made to the assassination campaign inside Pakistan — a close US ally — that began under his predecessor, President George W. Bush.

The Long War Journal, a blog that focuses its coverage on the war efforts in Iraq and Afghanistan, has been tracking US drone and other air power attacks in Pakistan for some time. Using open-source information, the blog tallied five US aerial attacks in Pakistan in 2007 and 36 in 2008, most of those in the last half of that year.

In 2009, President Obama’s first year in office, the tempo of such attacks in Pakistan increased 47 percent, to 53. The vast majority of these have been carried out with drones.

Tuesday’s strike brought this year’s tally to 12, with just over 100 fatalities. That’s just under a quarter of last year’s total. If that pace were matched for the rest of the year, there will be 134 US attacks inside Pakistan.

To be sure, there are frequently conflicting public claims about the number of civilians or militants killed in such attacks. On a number of a occasions, senior Taliban or Al Qaeda-linked figures have been reported killed, only to emerge on videotape later to say reports of their demise were exaggerated. Hakimullah Mehsud, the current leader of the Pakistani Taliban, was once reported dead – and then made a public appearance in good health. US officials now say they’re confident that he was killed by a December drone strike. His predecessor, Baitullah Mehsud, was killed by a US drone strike in August, 2009.

Two of the men vying to replace him at the head of the country’s Taliban movement have also been incorrectly reported as dead in the past.

Strikes controversial among Pakistanis and in strategic circles

The drone strikes have been controversial in Pakistan, where many average citizens view them as an extra-legal violation of national sovereignty by the US, which may be a key provider of military and economic aid to Islamabad but is still viewed with suspicion by millions of the nation’s citizens.

Pakistan has generally been officially quiet about its support for the strikes, but US officials say they generally have approval for their operations and have received targeting information from the Pakistani military, which pressed major offensives against the Taliban in South Waziristan and the Swat Valley last year. The country’s military has been less active in North Waziristan, where the bulk of US aerial attacks have taken place, and the country says it’s not planning major anti-Taliban offensives for 2010. Tuesday’s strikes were in North Waziristan.

The drone strikes have been controversial in strategic circles as well. David Kilcullen, one of the most influential advisers in US counterinsurgency strategy in the past few years, said he opposed drone strikes inside Pakistan last year: “Unilateral strikes against targets inside Pakistan, whatever other purpose they might serve, have an unarguably and entirely negative effect on Pakistani stability,” he wrote in the Small Wars Journal.

But they have emerged as a favorite tactic of the Obama administration, and the US may soon outsource such attacks to Pakistan itself. Pakistani officials have been pressing the US for drones of their own, and Defense Secretary Robert Gates said recently that’s a request the administration is considering fulfilling.