The US is totally broke and the only asset left is the military. 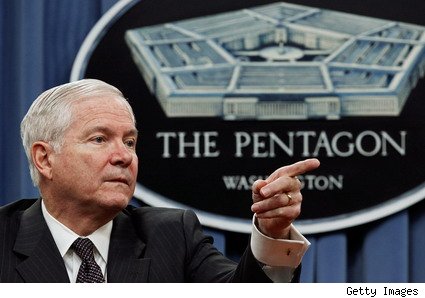 The Obama administration has unveiled a scary new view of the global security landscape and a new strategy intended to protect Americans and U.S. allies. It is a sharp change from previous Pentagon strategic assessments in that it focuses on the wars Americans are currently fighting, rather than on future conflicts in which the United States might be involved.

And that future, in the Pentagon’s view, is quite grim.

The new assessment — reflecting “a bracing dose of realism,” said Defense Secretary Robert Gates — promises no respite from today’s conflict-wracked world, and no backing away from the billions of dollars for new hardware and new capabilities that the administration says it will take to stay safe. On Gates’ short list: new long-range attack aircraft, armed air and ground robots, attack submarines, more special forces commandos, two new Army combat brigades, a new military task force to snatch up loose nuclear weapons, and updated battle concepts for coordinated air and sea attacks into the territory of adversaries equipped with high-tech defenses

This is the heart of two new documents released Monday by Gates, the former CIA director who was chosen to head the Pentagon by President George W. Bush in late 2006 and held in office by President Obama. One paper is the awkwardly named Quadrennial Defense Review, or QDR in Pentagon-speak, a study mandated every four years by Congress to assess security threats and defense capabilities. The other, also released Monday was the Pentagon’s 2011 defense budget proposal ($708.2 billion, a 1.8 percent real increase over current spending) and a request for $3 billion to help pay for combat operations in Afghanistan this year.

Neither should be a surprise. As a presidential candidate 18 months ago, Obama accepted an anti-war mantle because of his announced determination to end to the war in Iraq and bring the troops home. But Candidate Obama also spoke of Afghanistan as a righteous war that must be won. As president, Obama, having grappled for months with the nasty reality of war in Afghanistan, acknowledged in his Nobel Peace Prize acceptance speech in December that in a brutal world, armed force is essential.

“We must begin by acknowledging the hard truth: We will not eradicate violent conflict in our lifetimes,” Obama said. “There will be times when nations — acting individually or in concert — will find the use of force not only necessary but morally justified.”

Whether Congress will agree with the budget priorities reflected in the two documents is another matter. In keeping with a lean wartime budget, the defense funding requests the administration will take to Capitol Hill Tuesday continue the sharp shift that Gates has pursued away from the long-term production of costly weapons that are not needed or are meant for future conflicts. The focus is toward more immediate war-fighting needs.

Gates has fought with Congress over terminating production of the C-17 cargo plane, for example, because the Pentagon already has all it needs. But such production contracts, stretched out over a decade or more, mean home-state jobs, and Congress has battled to keep the giant cargo plane in production. Similarly, Gates Monday announced his intention to cancel development of an alternative engine for the F-35 Joint Strike Fighter, another budget item held dear in Congress and opposed by the Pentagon.

Meantime, Gates has requested short-term funds for 10,600 additional heavy troop carriers, called Mine Resistant Ambush-Protected (MRAP) vehicles, for Afghanistan, including 4,000 off-road versions. Currently there are about 15,000 such vehicles being used by U.S. troops in Afghanistan.

The QDR, the review document that sets strategic and budget requirements for the next four years and beyond, took a year to complete and has full support of the Joint Chiefs of Staff. Jettisoned from the Bush-era QDRs is a justification for pre-emptive attack — the theory of “just war” that was used as a basis to validate the 2003 U.S. invasion of Iraq. But in a Pentagon briefing Monday, Gates said there are plenty of “plausible, real-world threats” that range from cyber attacks to missile attacks by terrorists on U.S. forces deployed in the Middle East, to the detonation of IEDs at home.

High among the potential threats are outbreaks elsewhere of conflicts similar to the war in Afghanistan, a bloody and high-intensity war with insurgents driven by religious and tribal fanaticism. Iraq and Afghanistan, two conflicts in which the United States currently has committed 176,000 troops, are “not aberrations, but harbingers” of future conflict, Michele Flournoy, the Pentagon’s top civilian strategist, told reporters Monday.

Faced with such a spectrum of threats, the Pentagon concluded that while the United States must focus primarily on winning the wars in Iraq and Afghanistan, “we can’t afford to ignore any” potential threat, as Flournoy put it.

‘We have learned through painful experience that the wars we fight are seldom the wars that we planned,” Gates said. “As a result, the United States needs a broad portfolio of military capabilities with maximum versability across the widest possible spectrum of conflict.”

Yet the central focus of the new strategic assessment and budget is on today’s troops. They are to receive a range of new resources from additional training in languages and culture abroad, to protection from enemy missiles, and even more family support, child care and tuition assistance. Until now, Gates said, the Pentagon planners gave a higher priority to distant threats than to current combat. “My problem, when I arrived here, [was that] those fighting the current battle had no seat at the budget table, at all!” Gates said heatedly, underscoring his determination to put first the needs of those who fight the nation’s wars.

Even so, U.S. forces deployed in combat will continue to be short of battlefield intelligence, helicopters, language skills and other “critical” capabilities, the Pentagon assessment said. These shortages “could worsen over time” given the high demands for deployed forces projected in the future,” the QDR acknowledged.