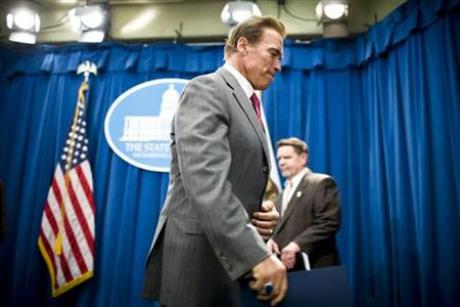 SAN FRANCISCO (Reuters) – California’s main debt rating was cut on Wednesday by Standard & Poor’s, which said the government of the most populous U.S. state could nearly run out of cash in March — and another rating cut might follow.

The state government’s budget gap of nearly $20 billion over the next year and a half leaves it in a precarious situation, requiring tax increases or spending cuts, either of which may slow economic recovery, the agency said in a statement.

“If economic or revenue trends substantially falter, we could lower the state rating during the next six to 12 months,” S&P said after cutting the rating on $63.9 billion of California’s general obligation debt one notch to A- from A.

The new level is four notches above “junk” status, a level at which many investors refuse to buy debt.

“The big question is, is there any fear they will get downgraded out of investment grade (so) you may have to sell … that’s where I think it would get interesting or hairy,” said Eaton Vance portfolio manager Evan Rourke.

Bond prices did not move much, though, since many expected the downgrade, he said.

S&P’s downgrade was overdue because the state’s revenues have been so weak, said Dick Larkin, director of credit analysis at Herbert J. Sims Co Inc in Iselin, New Jersey. “Frankly I can’t understood why it took S&P so long,” he said. “They could have made that decision back in September.”

California already had the lowest debt rating of any U.S. state before the downgrade, and 39 state governments are struggling with shortfalls this fiscal year, according to the nonpartisan Center on Budget and Policy Priorities.

Many are begging for more federal funds and caught between cutting social programs, raising taxes, or both.

The housing market implosion was felt especially strongly in California, a subprime mortgage lending center. Its double-digit unemployment rate, one of the highest in the United States, is expected to endure for a year or more.

California’s government resorted to issuing IOUs last year for the second time since the Great Depression when it nearly ran out of cash. Officials are scrambling to raise $1 billion for March and the shortfall could be worse in July, S&P said.

State Treasurer Bill Lockyer’s spokesman Tom Dresslar said S&P’s downgrade “highlights the critical need for the legislature and the governor to produce a swift budget resolution that is credible to the market.”

“Standard & Poor’s makes it clear the failure to act in a timely manner and with credibility threatens to further lower our GO rating,” Dresslar said, adding that a further cut would hit taxpayers already paying higher interest rates than people in some emerging economies.

The cost to insure California’s debt with credit default swaps is now higher than debt of developing countries, such as Kazakhstan, Lebanon and Uruguay. It costs $277,000 per year for five years to insure $10 million in California debt, compared with $172,000 for Kazakh debt.

“There’s another notch to go before they hit bottom,” Strickland said, adding that he expects another long and ugly battle to fill the state budget’s shortfall.

Governor Arnold Schwarzenegger less than a week ago unveiled a plan to balance the state’s books, largely with spending cuts that he described as draconian and which leaders of the Democrat-controlled legislature sharply criticized.

S&P said “timely progress” on a budget fix would be impeded by previous reliance on one-time measures, fewer choices for one-time cuts, extraordinary reliance on federal aid in Schwarzenegger’s plan, and California’s unusual requirement for a supermajority of lawmakers to pass a budget.

The Republican governor’s budget plan also said that while the state government faces cash challenges in March, it will have sufficient cash to repay $8.8 billion in revenue anticipation debt in May and June as scheduled.

State Finance Director Ana Matosantos along with Lockyer and State Controller John Chiang said on Monday they are working together so the state government honors its RAN debt.

Bond payments are by law a top state priority and state Finance Department spokesman H.D. Palmer said they will be honored: “Even though we’ve got to make some decisions in managing March we absolutely have ample cash on hand to make our RAN payments in May and June on time and in full.”

Larkin said the three major rating agencies will hold off on more downgrades to California’s credit rating to avoid roiling the municipal debt market, even in the event budget talks between Schwarzenegger and lawmakers drag on.

“They’ll give the state an awful lot of rope,” Larkin said. “For a state to go below investment grade would cast a pall on every state and local issuer out there.”