The US government has looted the taxpayer through bailouts for Wall Steet banksters and stimulus packages like there is no tomorrow.

Here is what Obama had to say about deficit spending:

Here is what Obama is really doing:

NEW YORK (CNNMoney.com) — The U.S. government posted a deficit of $91.9 billion in December, nearly double the shortfall of a year earlier and marking the government’s 15th straight month in the red, the Treasury Department reported Wednesday.

The shortfall brings the total deficit for the first quarter of fiscal year 2010 to $388.5 billion, up from $332 billion during the same period last year.

It was the second consecutive December the government spent more than it took in. In December 2008, the deficit was $51.8 billion.

Obviously Obama is much, much worse than Bush. A task that I thought was almost impossible to achieve.

This is Obamanomics, looting the US taxpayer until there is nothing left:

– Nobel Peace Laureate Obama seeks additional $33 billion for wars, on top of a record request for $708 billion for the Defense Department (AP)

Many Americans still think that Obama is on ‘their’ side. Here is the truth about Obamanomics:

Fitch Ratings has issued the starkest warning to date that the US will lose its AAA credit rating unless acts to bring the budget deficit under control, citing a spiral in debt service costs and dependence on foreign lenders. 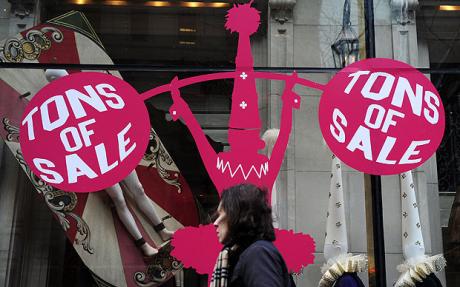 Fitch warns the US must cut spending and raise taxes to cut its deficit to save its AAA rating. Despite better-than-expected retail sales in December, consumers are struggling and the deficit is out of control. Photo: AFP

Brian Coulton, the agency’s head of sovereign ratings, said the US is shielded for now by its pivotal role in global finance and the dollar’s status as the key reserve currency, but the picture is deteriorating fast enough to ring alarm bells.

“Difficult decisions will have to be made regarding spending and tax to underpin market confidence in the long-run sustainability of public finances. In the absence of measures to reduce the budget deficit over the next three to five years, government indebtedness will approach levels by the latter half of the decade that will bring pressure to bear on the US’s ‘AAA’ status”, he said.

Fitch expects the combined state and federal debt to reach 94pc of GDP next year, up from 57pc at the end of 2007. Federal interest costs will reach 13pc of revenues, meaning that an eighth of all taxes will go to service debt. Most fiscal experts view this level as dangerously close to the point of no return for debt dynamics.

The rating alert is a reminder that fiscal stimulus and bank rescues across the world have merely shifted private debt on to public shoulders. The bail-outs looked deceptively ‘costless’ at the time, but the damage to sovereign states may take years to repair. The US Treasury says interest payments as a share of GDP will rise to 3.6pc by 2016, the highest since data began in 1940 – when it was 0.8pc.

Mr Coulton said the US is vulnerable to “potential interest rate shocks” due to its reliance on short-term debt and foreign investors. The average maturity of US government debt has fallen to four years, compared to seven for Europe’s AAA club, and 10 for Britain. “The share of three-month bills has risen very sharply as a result of recapitalising banks,” he said.

This raises the danger of a roll-over crisis. Chinese, Japanese, and Mid-East investors own almost half of the stock of US debt. They are more likely to liquidate holdings than domestic investors, if there were a loss of confidence in Washington or the Federal Reserve. Short maturities mean that any jump in interest rates will be felt quickly.

Stephen Lewis, of Monument Securities, said a US downgrade would rip the anchor from the global system and pose a grave risk to the stability. “This would set off tremors, making all dollar assets less secure. You could argue that the reason why the rating agencies have not already downgraded the US and Britain is that they fear the consequences for the global economy if they pull the trigger,” he said.

While US debt was higher after World War Two, circumstances were very different. The age structure was healthier. Most bonds were held by Americans. Demobilisation of the troops allowed for drastic budget cuts. America had emerged as the world’s strategic and economic Colossus. This time the US cannot rely on exuberant growth to whittle down the debt.

– President Obama: Another Busy Day in The Oval Office!