Atsushi Nakanishi has condensed his possessions to two suitcases, which he stores in lockers at the capsule hotel where he lives. 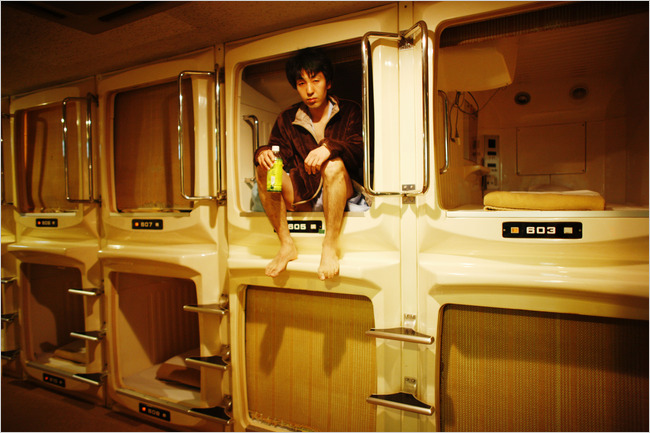 Atsushi Nakanishi is among the jobless living in a capsule hotel, renting a bunk with no door. 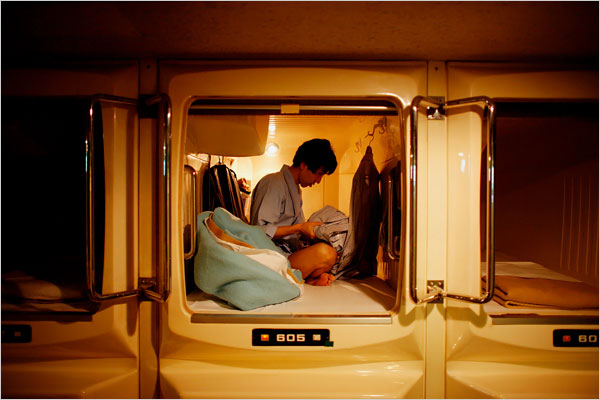 The capsules have no doors, only screens that pull down. Every bump of the shoulder on the plastic walls, every muffled cough, echoes loudly through the rows.

OKYO — For Atsushi Nakanishi, jobless since Christmas, home is a cubicle barely bigger than a coffin — one of dozens of berths stacked two units high in one of central Tokyo’s decrepit “capsule” hotels.

“It’s just a place to crawl into and sleep,” he said, rolling his neck and stroking his black suit — one of just two he owns after discarding the rest of his wardrobe for lack of space. “You get used to it.”

When Capsule Hotel Shinjuku 510 opened nearly two decades ago, Japan was just beginning to pull back from its bubble economy, and the hotel’s tiny plastic cubicles offered a night’s refuge to salarymen who had missed the last train home.

Now, Hotel Shinjuku 510’s capsules, no larger than 6 1/2 feet long by 5 feet wide, and not tall enough to stand up in, have become an affordable option for some people with nowhere else to go as Japan endures its worst recession since World War II.

Once-booming exporters laid off workers en masse in 2009 as the global economic crisis pushed down demand. Many of the newly unemployed, forced from their company-sponsored housing or unable to make rent, have become homeless.

The country’s woes have led the government to open emergency shelters over the New Year holiday in a nationwide drive to help the homeless. The Democratic Party, which swept to power in September, wants to avoid the fate of the previous pro-business government, which was caught off-guard when unemployed workers pitched tents near public offices last year to call attention to their plight.

“In this bitter-cold New Year’s season, the government intends to do all it can to help those who face hardship,” Prime Minister Yukio Hatoyama said in a video posted Dec. 26 on YouTube. “You are not alone.”

Mr. Nakanishi considers himself relatively lucky. After working odd jobs on an Isuzu assembly line, at pachinko parlors and as a security guard, Mr. Nakanishi, 40, moved into the capsule hotel in Tokyo’s Shinjuku district in April to save on rent while he worked night shifts at a delivery company.

Mr. Nakanishi, who studied economics at a regional university, dreams of becoming a lawyer and pores over legal manuals during the day. But with no job since Christmas, he does not know how much longer he can afford a capsule bed.

The rent is surprisingly high for such a small space: 59,000 yen a month, or about $640, for an upper bunk. But with no upfront deposit or extra utility charges, and basic amenities like fresh linens and free use of a communal bath and sauna, the cost is far less than renting an apartment in Tokyo, Mr. Nakanishi says.

Still, it is a bleak world where deep sleep is rare. The capsules do not have doors, only screens that pull down. Every bump of the shoulder on the plastic walls, every muffled cough, echoes loudly through the rows.

Each capsule is furnished only with a light, a small TV with earphones, coat hooks, a thin blanket and a hard pillow of rice husks.

Most possessions, from shirts to shaving cream, must be kept in lockers. There is a common room with old couches, a dining area and rows of sinks. Cigarette smoke is everywhere, as are security cameras. But the hotel staff does its best to put guests at ease: “Welcome home,” employees say at the entrance.

“Our main clients used to be salarymen who were out drinking and missed the last train,” said Tetsuya Akasako, head manager at the hotel.

But about two years ago, the hotel started to notice that guests were staying weeks, then months, he said. This year, it introduced a reduced rent for dwellers of a month or longer; now, about 100 of the hotel’s 300 capsules are rented out by the month.

After requests from its long-term dwellers, the hotel received special government permission to let them register their capsules as their official abode; that made it easier to land job interviews.

At 2 a.m. on one recent December night, two young women watched the American television show “24” on a TV inside the sauna. One said she had traveled to Tokyo from her native Gunma, north of the city, to look for work. She intended to be a hostess at one of the capital’s cabaret clubs, where women engage in conversation with men for a fee.

The woman, 20, said she was hoping to land a job with a club that would put her up in an apartment. She declined to give her name because she did not want her family to know her whereabouts.

“It’s tough to live like this, but it won’t be for too long,” she said. “At least there are more jobs here than in Gunma.”

The government says about 15,800 people live on the streets in Japan, but aid groups put the figure much higher, with at least 10,000 in Tokyo alone. Those numbers do not count the city’s “hidden” homeless, like those who live in capsule hotels. There is also a floating population that sleeps overnight in the country’s many 24-hour Internet cafes and saunas.

The jobless rate, at 5.2 percent, is at a record high, and the number of households on welfare has risen sharply. The country’s 15.7 percent poverty rate is one of the highest among industrialized nations.

These statistics have helped shatter an image, held since the country’s rise as an industrial power in the 1970s, that Japan is a classless society.

“When the country enjoyed rapid economic growth, standards of living improved across the board and class differences were obscured,” said Prof. Hiroshi Ishida of the University of Tokyo. “With a stagnating economy, class is more visible again.”

Still, Naoto Iwaya, 46, is on the verge of joining the hopeless. A former tuna fisherman, he has been living at another capsule hotel in Tokyo since August. He most recently worked on a landfill at the city’s Haneda Airport, but that job ended last month.

“I have looked and looked, but there are no jobs. Now my savings are almost gone,” Mr. Iwaya said, after checking into an emergency shelter in Tokyo. He will be allowed to stay until Monday.

4 thoughts on “Japan: When Home Is a Tiny Plastic Bunk Barely Bigger Than A Coffin”