Thieves contracted by a neo-Nazi group that planned to sell sign to fund attacks in Sweden, newspaper claims 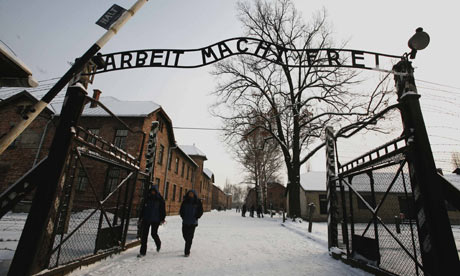 The Auschwitz sign before it was stolen Photograph: Irek Dorozanski/Reuters

It sounds like the plot of a Steig Larsson thriller: a band of eastern European criminals is contracted to steal an iconic piece of Nazi memorabilia, which is then sold to a mysterious collector to finance a neofascist bomb attack on the Swedish parliament.

But today it emerged that Swedish investigators are helping Polish detectives investigate the theft of the sign from Auschwitz, amid reports that the robbery was linked to a rightwing terror plot.

The wrought iron plaque reading Arbeit Macht Frei (work sets you free) which spanned the entrance at the former Nazi death camp was wrenched from the gate on 18 December, and recovered three days later, cut into three pieces, in a forest in northern Poland.

The robbery prompted Poland to declare a state of emergency, and provoked impassioned calls for the sign’s return from concentration camp survivors and the Israeli prime minister, Binyamin Netanyahu.

The five men being held in police custody in Krakow in connection with the theft have been described by Polish prosecutors as common criminals who had apparently acted for financial gain.

But according to the Swedish daily Aftonbladet, the men were contracted by a neo-Nazi group which planned to sell it on to a third party, a foreign rightwing extremist or collector of Nazi memorabilia, with the aim of using the funds to finance a string of attacks in Stockholm.

Boguslawa Marcinkowska, the spokeswoman for the public prosecutor’s office in krakow, said: “The evidence that we have so far points to there being links with Sweden”. Polish state television TVP1 quoted official sources saying that Swedish neo-Nazis were behind the theft.

Poland’s justice minister, Krzysztof Kwiatkowski, said: “The investigations have taken on a much broader dimension than we had initially thought”.

The Swedish justice ministry has confirmed that it is helping the Polish police with investigations after the state prosecutor’s office in Krakow lodged an official application asking for its help.

Separately, the Swedish security service Säpo, confirmed that it was investigating an alleged neo-Nazi plot to blow up the Riksdagen, the parliament building in Stockholm, as well as the foreign ministry and the home of the prime minister, Fredrik Reinfeldt. The aim of the plot, according to Säpo, was to create as much disruption as possible ahead of the 2010 parliamentary elections. It would not confirm or deny reports of a possible connection between the plot and the Auschwitz sign theft.

Polish investigators, who said from the start of the inquiry that they suspected the mastermind of the robbery operated outside Poland, would only say today that he or she “came from a European country”.

The five suspected robbers, aged between 25 and 39, all have criminal records but none is suspected of having a neo-Nazi background. They were reportedly set to receive a total of 20,000 zlotys (£4,320) to share between them for the theft. The police told the Polish press agency PAP that they believe a foreign national, possibly the person who ordered the theft, visited the former death camp prior to the robbery in order to be able to plan it in detail.

The theft was carried out without attracting the attention of nightwatchmen or being caught on CCTV cameras. But in their haste to make off with the sign, the thieves dropped the letter i from the word Frei. It was found in the snow nearby.

The wider plot has the whiff of a thriller by the late Swedish writer Larsson, not least because he was an expert on right-wing extremism, a subject which he wove into many of his books.

Larsson sought to expose neo-Nazi activity in Sweden, forming in 1995 the group Expo-foundation, following eight murders for which neo-Nazis were held responsible. For several years the scene was considered small but particularly brutal.

There are plans next month to celebrate the 65th anniversary of the liberation of the Auschwitz death camp in which around 1.1 million people, most of them Jews, died. Blacksmiths are meanwhile working on repairing the sign, which stands as a cynical commentary on the Holocaust, in time for the event.

Concern about the safety of the Auschwitz site, which is now a memorial and museum, has prompted local authorities to promise to install more close circuit television cameras and to review its security procedures.

Publicity surrounding the robbery has attracted financial donations from around the world.