Still think that such an atrocity – reported by the Times – is impossible?: 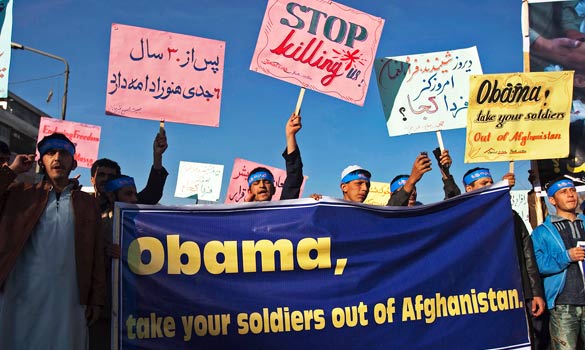 The report into the deaths has provoked demonstrations (Reuters)

American-led troops were accused yesterday of dragging innocent children from their beds and shooting them during a night raid that left ten people dead.

Afghan government investigators said that eight schoolchildren were killed, all but one of them from the same family. Locals said that some victims were handcuffed before being killed.

Western military sources said that the dead were all part of an Afghan terrorist cell responsible for manufacturing improvised explosive devices (IEDs), which have claimed the lives of countless soldiers and civilians.

“This was a joint operation that was conducted against an IED cell that Afghan and US officials had been developing information against for some time,” said a senior Nato insider. But he admitted that “the facts about what actually went down are in dispute”.

The allegations of civilian casualties led to protests in Kabul and Jalalabad, with children as young as 10 chanting “Death to America” and demanding that foreign forces should leave Afghanistan at once.

President Karzai sent a team of investigators to Narang district, in eastern Kunar province, after reports of a massacre first surfaced on Monday.

“The delegation concluded that a unit of international forces descended from a plane Sunday night into Ghazi Khan village in Narang district of the eastern province of Kunar and took ten people from three homes, eight of them school students in grades six, nine and ten, one of them a guest, the rest from the same family, and shot them dead,” a statement on President Karzai’s website said.

Assadullah Wafa, who led the investigation, said that US soldiers flew to Kunar from Kabul, suggesting that they were part of a special forces unit.

“At around 1 am, three nights ago, some American troops with helicopters left Kabul and landed around 2km away from the village,” he told The Times. “The troops walked from the helicopters to the houses and, according to my investigation, they gathered all the students from two rooms, into one room, and opened fire.” Mr Wafa, a former governor of Helmand province, met President Karzai to discuss his findings yesterday. “I spoke to the local headmaster,” he said. “It’s impossible they were al-Qaeda. They were children, they were civilians, they were innocent. I condemn this attack.”

In a telephone interview last night, the headmaster said that the victims were asleep in three rooms when the troops arrived. “Seven students were in one room,” said Rahman Jan Ehsas. “A student and one guest were in another room, a guest room, and a farmer was asleep with his wife in a third building.

“First the foreign troops entered the guest room and shot two of them. Then they entered another room and handcuffed the seven students. Then they killed them. Abdul Khaliq [the farmer] heard shooting and came outside. When they saw him they shot him as well. He was outside. That’s why his wife wasn’t killed.”

A local elder, Jan Mohammed, said that three boys were killed in one room and five were handcuffed before they were shot. “I saw their school books covered in blood,” he said.

The investigation found that eight of the victims were aged from 11 to 17. The guest was a shepherd boy, 12, called Samar Gul, the headmaster said. He said that six of the students were at high school and two were at primary school. He said that all the students were his nephews. In Jalalabad, protesters set alight a US flag and an effigy of President Obama after chanting “Death to Obama” and “Death to foreign forces”. In Kabul, protesters held up banners showing photographs of dead children alongside placards demanding “Foreign troops leave Afghanistan” and “Stop killing us”.

Hekmatullah, 10, a protester, said: “We’re sick of Americans bombing us.” Samiullah Miakhel, 60, a protester. said: “The Americans are just all the time killing civilians.”

Nato’s International Security Assistance Force said that there was “no direct evidence to substantiate” Mr Wafa’s claims that unarmed civilians were harmed in what it described as a “joint coalition and Afghan security force” operation.

“As the joint assault force entered the village they came under fire from several buildings and in returning fire killed nine individuals,” he said.

• Eight Americans were killed in an attack in eastern Afghanistan yesterday (Jerome Starkey writes). Nato’s International Security Assistance Force said that the dead were not uniformed soldiers. Afghan sources said that they were civilians killed in a suicide attack on a compound in Khost province. The US Embassy in Kabul said: “Eight Americans have been killed in an attack on RC-East,” referring to the military region of eastern Afghanistan that includes 14 provinces.