This study relies on facts and not on wishful thinking computations with complex climate models. 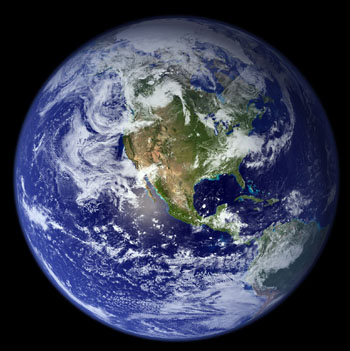 This suggests that terrestrial ecosystems and the oceans have a much greater capacity to absorb CO2 than had been previously expected.

The results run contrary to a significant body of recent research which expects that the capacity of terrestrial ecosystems and the oceans to absorb CO2 should start to diminish as CO2 emissions increase, letting greenhouse gas levels skyrocket.

Dr Wolfgang Knorr at the University of Bristol found that in fact the trend in the airborne fraction since 1850 has only been 0.7 ± 1.4% per decade, which is essentially zero.

The strength of the new study, published online in Geophysical Research Letters, is that it rests solely on measurements and statistical data, including historical records extracted from Antarctic ice, and does not rely on computations with complex climate models.

This work is extremely important for climate change policy, because emission targets to be negotiated at the United Nations Climate Change Conference in Copenhagen early next month have been based on projections that have a carbon free sink of already factored in. Some researchers have cautioned against this approach, pointing at evidence that suggests the sink has already started to decrease.

So is this good news for climate negotiations in Copenhagen? “Not necessarily”, says Knorr. “Like all studies of this kind, there are uncertainties in the data, so rather than relying on Nature to provide a free service, soaking up our waste carbon, we need to ascertain why the proportion being absorbed has not changed”.

Another result of the study is that emissions from deforestation might have been overestimated by between 18 and 75 per cent. This would agree with results published last week in Nature Geoscience by a team led by Guido van der Werf from VU University Amsterdam. They re-visited deforestation data and concluded that emissions have been overestimated by at least a factor of two.

Nature knows how to deal with CO2: