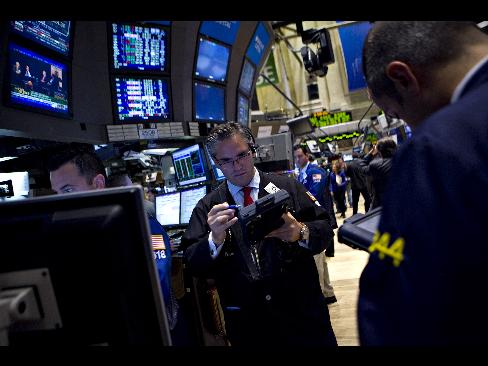 Oct. 26 (Bloomberg) — The U.S. Standard & Poor’s 500 Index is about 40 percent overvalued and headed for a drop as central banks pull back on securities purchases that pushed up asset prices, according to economist Andrew Smithers.

Declines are likely because banks will need to sell more shares to raise capital, the economist and president of research firm Smithers & Co. said in an Oct. 23 interview at Bloomberg’s Tokyo office. The closing price on Oct. 23 of 1,079.6 was 40 percent above 771.14, a level last seen in March, according to data compiled by Bloomberg.

“Markets are very vulnerable to an end of quantitative easing,” said Smithers, 72, who recommended avoiding stocks in 2000 just as the U.S. benchmark entered a two-year bear market. “Central banks, they’ve got to stop some time and if that happens everything will come down.”

Central banks from the Federal Reserve to the Bank of England last year embarked on unprecedented measures to flood credit markets with cash in order to rescue the global financial system from the worst crisis since the Great Depression.

Those purchases may be nearing an end, said Smithers, who worked for 27 years at S.G. Warburg & Co. where he ran the investment management business. The Fed’s emergency liquidity programs including the Term Auction Facility and commercial paper purchases have shrunk as the central bank completes the scheduled purchases of housing debt and Treasuries. Bank of England policy makers voted unanimously at their latest meeting to leave the asset purchase program unchanged, minutes showed.

Asset purchases have doubled the size of the Fed’s balance sheet to $2.1 trillion since the start of the current financial crisis. The Bank of England has spent 175 billion pounds ($286 billion) over the last seven months to rescue the economy.

The boost to asset prices globally helped send the S&P 500 up by 60 percent from its 12-year low on March 9. Crude-oil prices have more than doubled from last year’s bottom in December, reaching as high as $82 a barrel. This month, a Hong Kong apartment sold for a record price-per-square foot.

“Quantitative easing has set off another sharp, and so far containable asset bubble,” Smithers said. “But if it gets too high and starts to come down then we’ll go straight back” into recession.

A March 23 article on the Financial Times’s Investment Adviser Webs site said Smithers was advising clients who planned to hold positions less than several years to avoid shares. For longer-term investors, “we’re not a long way short of really, really good value,” he said, according to the FT.

The economist said in an interview with Bloomberg that he stopped buying equities in the 1990s because of expensive valuations and began purchasing them again only for a brief period during the lows of the current crisis.

The worst performance by U.S. stocks compared with junk bonds since at least 1986 is making some investors even more bullish on equities. While owning debt in the riskiest companies has paid about the same as the Standard & Poor’s 500 Index over the last 23 years, bonds are returning more than twice as much in 2009, according to Merrill Lynch & Co. and Bloomberg data.

Barclays Plc and ING Groep NV are increasing share purchases on speculation that improving corporate earnings will prolong the rally in equities and shrink the gap again. Profits for S&P 500 companies are forecast to climb 53 percent over the next two years as the Federal Reserve holds interest rates close to zero to end the worst recession since the 1930s, according to analyst estimates compiled by Bloomberg.

Smithers, along with fellow economist Stephen Wright, argued that U.S. equities were overvalued in a March 2000 book the two co-authored entitled “Valuing Wall Street.” The S&P 500 Index plunged 49 percent over 2 1/2 years from a record high reached that month.

He based his prediction in the book on Tobin’s Q, an indicator of whether the market is overvaluing or undervaluing company assets compared with their replacement cost. He uses both the Q ratio, as well as a cyclically adjusted price-to- earnings ratio compiled by Yale University’s Robert Shiller, for his estimate that U.S. shares are 40 percent overvalued.

In his latest book published in July, “Wall Street Revalued,” Smithers argues central banks need to police asset prices such as equities, real estate and debt in order to prevent the bubble and crash cycle seen in recent years.

In the book he proposes a successor to the efficient markets hypothesis, naming it the imperfectly efficient market hypothesis. Smithers contends that asset prices rotate around a fair value level that can be objectively measured, whereas efficient market theorists say assets are always valued at the correct price and therefore need no regulation by authorities.

Federal Reserve Chairman Ben S. Bernanke said on Oct. 19 asset bubbles present a challenge that Asian governments will have to address in the future. That contrasts with his 2002 statement that monetary policy can’t be “directed finely enough to guide asset prices.”

Not all equity markets are as overpriced as the U.S., Smithers said. Japan may be the world’s cheapest major market though he doesn’t forecast short-term gains from betting on the nation’s stocks.

Profit margins at Japanese companies are likely to improve as companies invest less, lowering depreciation costs, he said. Depreciation eats up about two-thirds of earnings in Japan, compared with less than half for U.S. corporations, according to Smithers. Firms plan to cut capital spending 10.8 percent this year, the Bank of Japan’s quarterly Tankan survey released this month showed.

“It’s quite likely that Japan is the only significant market in the world that is not seriously overvalued,” he said. “When investment comes down, depreciation comes down.”

The economist also said banks such as Goldman Sachs Group Inc. will likely break up when they become subject to sliding- scale capital requirements that penalize them for being too large. Rising profits at financial institutions has largely been the result of shrinking competition in market-making, which has in turn provided banks with inside information on trading patterns, Smithers said.

“Market-making has become a doomsday machine,” Smithers said. “People are arrogant and think they can do wonders and they’ll be all too happy to split off. And you should raise the capital requirements until they do split off.”

To contact the reporter for this story: Patrick Rial in Tokyo at prial@bloomberg.net.