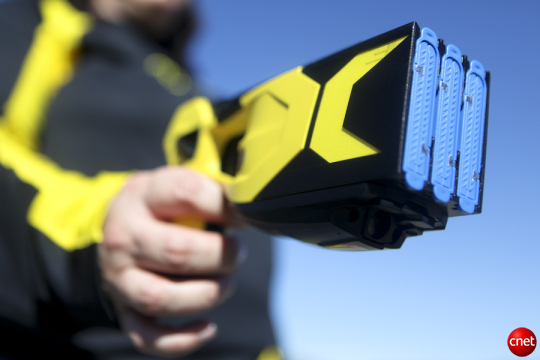 On Friday, Taser International held a demo day at the Alameda Sheriff’s Office Regional Training Center in Dublin, Calif., to show off some of the latest in electronic control devices.

The Taser X3, the newest device with multishot technology, goes beyond the single-shot capabilities of first-generation tasers and provides the ability to deploy a second and third cartridge immediately. Also, it can simultaneously zap three bad guys at once.

Taser International:
“The X3 is a revolutionary new multi-shot ECD that can engage multiple targets, display Warning Arcs™ while loaded, and deliver a calibrated Neuro Muscular Incapacitation (NMI) pulse that results in improved safety characteristics. While the X3 offers enhanced firepower over existing ECDs, it also represents a quantum leap in sensor and computation power – making it by far the most intelligent hand-held force option ever developed.” Source: Taser International 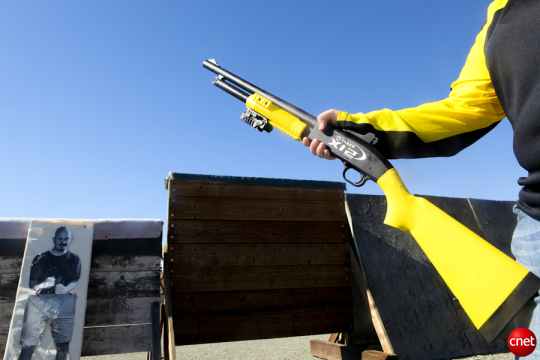 Taser International says its XREP (Extended Range Electronic Projectile) is the most technologically advanced projectile ever deployed from a 12-gauge pump-action shotgun. The self-contained, wireless electronic control device fires accurately up to 100 feet and attaches itself to the target before deploying its charge. Photo by James Martin/CNET

CNET News took a trip to the Alameda County Sheriff’s Office Regional Training Center on Friday to have a look at some of the newest equipment from Taser, which was among the companies showing off weaponry at the UrbanShield 2009 training event. The electric-shock gadgets are controversial and have drummed up some bad press over the years for causing the occasional serious injury or even fatality. But the company has maintained its insistence that they are significantly safer than the alternative (i.e. guns).

We didn’t get to tase anybody. But we did get to see the Shockwave, a big Taser device that can incapacitate five or six people at a time, which company representatives told us is designed for crowd-control situations and can be triggered remotely via a 100-foot firing wire.

There are also two recently released handheld Tasers: the X3, which unlike its single-shot predecessors can fire off a total of three shots at once; and the XREP, a Taser projectile that’s fired out of a modified 12-gauge shotgun (the modifications ensure that regular cartridges can’t be used instead). Both devices are bright yellow, which representatives told us means they’re easily identified as non-lethal weapons.

You can’t go to your local sporting goods store and buy these Tasers–unlike the smaller, consumer-grade C2 devices, the X3 and XREP lines are only sold to police, military, and sometimes animal-control professionals. Taser International’s vice president of training, Rick Guilbault, told us that a Taser was once used to pry off a rogue python that had wrapped itself around a woman’s arm and wouldn’t let go.

Another time, a Taser was successfully used to safely deter an out-of-control alligator in Florida. “But then they tried it in Australia on those big salt-water crocodiles,” Guilbault related, “and that didn’t work. It just made them mad.”