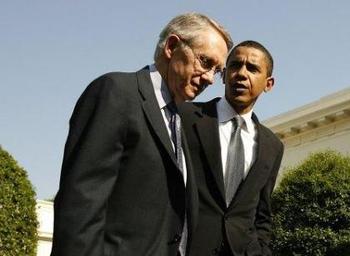 President Barack Obama is actively discouraging Senate Democrats in their effort to include a public insurance option with a state opt-out clause as part of health care reform. In its place, say multiple Democratic sources, Obama has indicated a preference for an alternative policy, favored by the insurance industry, which would see a public plan “triggered” into effect in the future by a failure of the industry to meet certain benchmarks.

The administration retreat runs counter to the letter and the spirit of Obama’s presidential campaign. The man who ran on the “Audacity of Hope” has now taken a more conservative stand than Senate Majority Leader Harry Reid (D-Nev.), leaving progressives with a mix of confusion and outrage. Democratic leaders on Capitol Hill have battled conservatives in their own party in an effort to get the 60 votes needed to overcome a filibuster. Now tantalizingly close, they are calling for Obama to step up.

“The leadership understands that pushing for a public option is a somewhat risky strategy, but we may be within striking distance. A signal from the president could be enough to put us over the top,” said one Senate Democratic leadership aide. Such pleading is exceedingly rare on Capitol Hill and comes only after Senate leaders exhausted every effort to encourage Obama to engage.

“Everybody knows we’re close enough that these guys could be rolled. They just don’t want to do it because it makes the politics harder,” said a senior Democratic source, saying that Obama is worried about the political fate of Blue Dogs and conservative Senate Democrats if the bill isn’t seen as bipartisan. “These last couple folks, they could get them if Obama leaned on them.”

But with fundamental reform of the health care system in plain sight for the first time in half a century, the president appears to be siding with those who see the Senate and its entrenched culture as too resistant to change. Administration officials say that Obama’s preference for the trigger, which is backed by Maine Republican Sen. Olympia Snowe, is founded in a fear that Reid’s public option couldn’t get the 60 votes needed to overcome a GOP filibuster. More specifically, aides fear that a handful of conservative Democrats will not support a bill unless it has at least one Republican member’s support.

The president’s retreat leaves Reid as the champion of progressive reform — an irony that is not lost on those who have long derided the Majority Leader as too cautious.

“Who knew that when it came down to crunch time, Harry Reid would be the one who stepped up to the plate and Barack Obama would shy away from the fight,” emailed one progressive strategist.

On Thursday evening, after taking the temperature of his caucus, Reid told Obama at a White House meeting that he was pushing a national public option with an opt-out provision. Obama, several sources briefed on the exchange, reacted coolly.

“He certainly didn’t embrace it and he seemed to indicate a preference for continuing to work on a strategy that involved Senator Snowe and a trigger,” said one aide briefed on the meeting. Several other sources, along with independent media reports, confirmed the exchange.

On Saturday, the activist group Progressive Change Campaign Committee — which just days earlier had targeted Reid in a separate campaign — took out a new television advertisement in Maine accompanied by an “emergency petition.” Titled, “Time to Fight,” the spot featured a former Obama campaign volunteer pleading with the president not to abandon the public plan.

“If this once-in-a-generation opportunity to pass a public option goes down the drain after we were just a couple votes away in each house of Congress, everyone will remember exactly who was and was not willing to fight when it counted,” said the group’s co-founder, Adam Green, when asked why he aired the ad. “Our grassroots pressure is an attempt to get President Obama to live up to the mandate for sweeping change that was given to him in the 2008 election.”

MoveOn.org rallied its base on Friday. “The President has said many, many times that a public option is the best way to keep insurance companies honest and lower skyrocketing health care costs. Senate Democrats are ready to fight for a public option — if the White House gives up now, it would be a tragic mistake,” said an e-mail to the group’s membership.

White House aides responded to the pressure not by embracing Reid’s more aggressive stance, but by denying reports that he was discouraging the opt-out proposal.

“The report is false,” Dan Pfeiffer, a top White House aide whose portfolio includes health care, said of a story in Talking Points Memo. “The White House continues to work with the Senate on the merging of the two bills. We are making good progress toward enacting comprehensive health reform.”

But the push-back, say sources with direct knowledge of deliberations between leadership and the administration, does not square with Obama’s private indications to Senate leaders. The sources say that the president has left little doubt about his apprehension regarding an opt-out approach.

It is not philosophical, one White House aide explained, but is a matter of political practicality. If the votes were there to pass a robust public option through the Senate, the president would be leading the charge, the aide said. But after six months of concern that it would be filibustered, the bet among Obama’s aides is that Reid is now simply being too optimistic in his whip count. The trigger proposal, said Democratic aides, has long been associated with White House Chief of Staff Rahm Emanuel.

“He’s been so convinced by his political people from the beginning that we can’t get a bill with a public option, he’s internalized it. Even though it’s now become obvious we can get a bill without selling out the public option, he’s still on that path,” said a top Democratic source. The White House, he said, continues to assure progressives it’ll improve the bill in conference negotiations between the Senate and House, but advocates are unconvinced.

“If we’re this close in the Senate and they’re not helping us, I have a feeling they could screw us in the conference,” said one.

Advocates of a public option largely consider a “trigger” the equivalent of no public option at all. A trigger would implement a public option only if insurance companies failed to meet certain benchmarks over time and it would only be implemented in the regions of the country where those benchmarks weren’t met. The Medicare prescription drug proposal passed in 2003 includes a “trigger,” but the public provision has never been activated despite soaring drug costs. The industry can help craft the trigger language and can game its stats to prevent it from becoming reality.

“The current state of our health system should be trigger enough for anyone who’s paying attention,” said a congressional aide in the middle of the health care battle. “The American people pulled the ‘trigger’ in November.”

The intellectual father of the public option, Yale Professor Jacob Hacker, told HuffPost that the trigger proposal is a betrayal.

“The trigger is an inside-the-beltway sleight of hand that would protect private insurers from the real competition that a strong public health insurance option would create,” he said in an e-mail. “It is unworkable in the current Senate bills, unwise as public policy, and unwanted by the substantial majority of Americans who say they want a straight-up public option.”