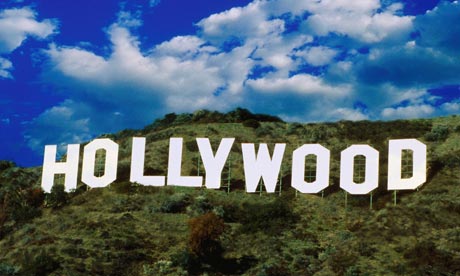 The famous Hollywood sign in Los Angeles. Film studios’ finances are in freefall and the number of movies in production has dropped sharply. Photograph: Craig Aurness/Corbis

The number of films being produced by Hollywood is set to fall by more than a third as the major studios struggle against a twin threat, industry analysts say.

Their problems stem from a dearth of funding and from the digital revolution in the way people consume moving images.

Mark Gill, head of the Film Department, an independent film finance firm, predicted that last year’s peak of 606 films to emerge from Hollywood would fall to fewer than 400 next year “and it may go lower than that in future”.

The finances are in freefall, Gill said. In the wake of the financial meltdown, banks that had acted as the main funders of big- and middle-budget films have withdrawn their largesse, sucking $12bn (£7.4bn) out of the $18bn available to the top studios.

Other lines of income have also shrivelled, most importantly DVD sales, which have plummeted by up to 25% in some studios, partly as a result of piracy.

Digital downloads and video-on-demand are the new buzz technologies, but they still bring in tiny amounts compared with the dwindling DVD market.

As a third blow, the hegemony of English-language Hollywood films is being challenged around the world, with audiences favouring homegrown talent.

That’s been a trend long pronounced in France, for instance, but it has now spread to places such as Greece and Japan, which a few years ago earned just 5% of its box office revenue from local language films but now has a figure of 65%.

The latest household name to draw attention to the crisis is Francis Ford Coppola, director of the Godfather trilogy and Apocalypse Now. Speaking recently at the Beirut Film Festival, where he is showing his latest film Tetro, he warned that “the cinema as we know it is falling apart”.

He told the Bloomberg news service that “it’s a period of incredible change”, predicting that two or three of the six big Hollywood studios were under such strain they would soon go bust.

That gloomy prognosis chimes with other industry analysts who claim that MGM in particular is on the edge, while other big studios are not far behind. Paramount Pictures registered a loss of almost $150m in the first half of this year.

With a sense of panic setting in across Hollywood, the industry has, in the past three months, seen the biggest shake-up of studio chiefs in 25 years.

In August, MGM ousted its chief executive Harry Sloan. Disney recently sacked its studio chief, Dick Cook, and Universal Pictures earlier this month dismissed its joint chairmen Marc Shmuger and David Linde following a string of box office disappointments, including the family film Land of the Lost and Sacha Baron Cohen’s Bruno which took in $60m – far short of his previous film Borat, which made $129m.

Paradoxically, while the world’s movie capital is in turmoil, the appetite for its products remains buoyant. Ticket revenue has continued to climb by about 2% this year, a modest figure, but a striking achievement in the midst of a recession.

Film buffs are likely to be most distressed not by the overall cut in films on release, but by the quality and nature of what will be on offer. As cash for new movies dries up, a greater proportion of the shrinking resources is going into a tiny range of sci-fi, superhero and mystic titles.

Coppola said that even if studios survive the upheaval, they will “just make certain kinds of films like Harry Potter – basically trying to make Star Wars over and over again, because it’s a business”.

For cinema to survive, Coppola suggested, it would have to become much more interactive, with directors attending live performances of their work on a nightly basis “like the conductor of an opera. Every night it can be a little different”.

1 thought on “Hollywood: Film studios’ finances are in freefall, film output likely to fall by a third”