The World Bank is close to ‘running out of money’, its president, Robert Zoellick, has disclosed. 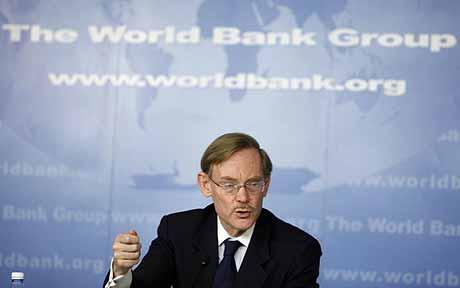 The Bank, whose job it is to support low-income countries, has had to hand out so much cash in the wake of the financial crisis that it faces a shortfall in what it can spare for new projects within 12 months.

“By the middle of next year we will face serious constraints,” said its president Robert Zoellick, as he launched a major campaign to persuade rich nations to pour more money into the Washington-based institution.

He conceded that such a task was likely to be extremely difficult, given the difficulties facing countries in the wake of the developed world’s biggest recession since the Second World War.

Although the Bank has enough cash to fund existing projects and its day-to-day operations, the demands thrown up by the global recession have meant it may need extra capital contributions from rich nations to bolster its balance sheet if it is to satisfy such needs.

Mr Zoellick, speaking at the opening of the IMF and World Bank annual meetings in Istanbul, said the Bank needed a capital increase of $3bn-$5bn, though others suspect the eventual need could be higher still.

He said he hoped that its shareholders, including the UK and other leading nations, would decide on resources before its spring meeting next April.

Mr Zoellick said: “We recognise that all countries are under budgetary strain and it is not an easy time to be asking for these things”. He said that a shortfall of cash for the IFC was a cause for particular concern, Mr Zoellick added, “because one of the issues in this recovery is the hand-off from government stimulus programs to private-sector development.”

Critically, the Bank’s three-year $100bn programme, committed to last year because of the virulence of the financial and economic crisis, is expected to fall short of the eventual demand from struggling economies. The majority of the money has been spent ensuring the survival of the most vulnerable nations.