“Your money is safe!” Sure!

It is much safer to believe in Santa Claus.

The FDIC has greatly underestimated the problems of our nation’s banking system.  Earlier in the week the FDIC proposed that banks put up $45 billion to protect bank depositors.  The average American must be amazed that a system backing $9 trillion in deposits is essentially broke.  Clearly the FDIC has the backing of the U.S. Treasury and Federal Reserve but there is some irony in having the FDIC tell banks to pay an early assessment to protect our money.  These banks are going to use bail out money to pay to protect taxpayer deposits!  The banking system is going to have some deep and profound issues as the $3 trillion in commercial real estate loans go bad in the next few years.

The problem is how the banking system is structured.  Take a look at how assets are distributed over the 8,204 banks: 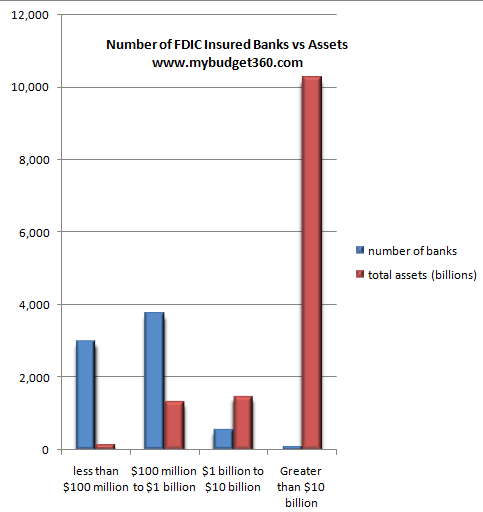 This is an incredible chart.  Total assets at FDIC insured banks amount to $13.3 trillion.  However, out of 8,204 banks 116 hold a stunning $10.28 trillion of these assets.  We can have the smaller banks fail and the asset base would hardly move.  Yet the issue of course is that the vast majority of big dollar problems are in the bigger banks.

The FDIC made the call for the prepayment this week because it is now officially in the red.  It is no surprise given that a system backing some $7.42 trillion in loans with what is now no reserve is doomed to fail.  It was destined to run out of money.  Yet it is naïve to think that only $45 billion is going to protect the system from the $3 trillion in commercial real estate loans that are held in many not too big to fail banks.  The end outcome is more trouble for banks and the taxpayer should gear up for a second round of bailouts.  If you doubt this the Federal Reserve has already discussed “Plan C” which was a backroom talk to preemptively bailout the commercial real estate industry.

The plan from the FDIC would front load bank assessment fees making institutions pay up for fees that were due up until 2012.  This assessment is going to wipe out the $1.8 billion in supposed bank profits from the first half of the year.  There isn’t any issue with the prepayment per se, but the fact that banks are claiming that all is well is a massive bait and switch on the American people.  The insurance fund is wiped out not because of great bank performance but because the FDIC is virtually taking over a few banks every Friday.  Of course this flies in the face of a recovering economy.

With recent auto sales data out, car sales plummeted as expected after the cash for clunkers gimmick ran out.  So banks with their $1.8 billion “profit” was nothing more than accounting chicanery and bailout money moved around to give the appearance of profit.

To show you how quickly things are changing the FDIC in May had projected losses of $70 billion from failed banks.  That number is now up to $100 billion and this is with the stock market going gangbusters and the financial sector rallying with hot money.  The insurance fund started out the year with $30 billion but most of that has already disappeared with rising delinquencies and high unemployment.

The problem with the FDIC approach is that it is exchanging liquid assets from reserves and taking over toxic mortgages from these failed banks.  These assets have much lower values in today’s market and chances are the FDIC is over estimating the value of the assets they are acquiring.  What is even more disturbing is their extremely optimistic outcomes on commercial real estate which are more toxic loans than even their residential property siblings.

The problem with the deposit insurance fund is we are told no depositor has ever lost a penny from insured deposits: 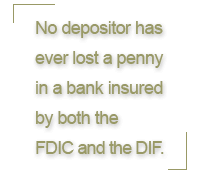 Of course this isn’t taking into account the subsidies and taxpayer money going to bail out banks or the devaluation and destruction of the U.S dollar.  You don’t lose a penny, you lose a dollar with how things are being approached.  The number of troubled institutions is growing exponentially: 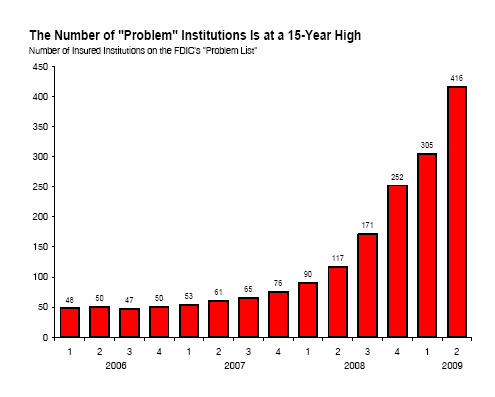 This is by the FDIC estimates so we can assume that more are on the troubled list.  By the end of this recession (or two) we will have 1,000 or more failed banks.