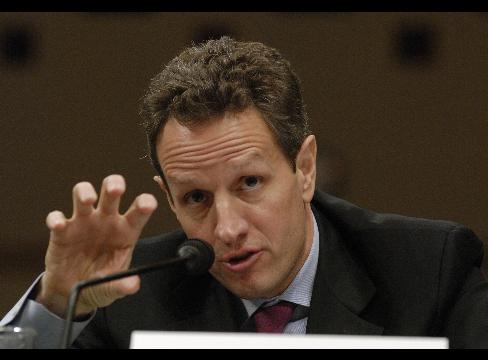 As a result, the Secretary was bombarded by pointed questions about his documented tax evasion from 2001-2004, the wisdom of spending trillions of dollars in the light of long-term dollar devaluation and even, in the words of one particularly irate questioner, “Why are you running the Treasury Department?”

Despite presumably having had time to prepare responses to each question well in advance, Geithner is still visibly discomfited by the entire exchange, picking at his shirt cuff and coughing nervously throughout the interview.

In one particularly telling moment, Geithner even admits “We have been forced to do just extraordinary things and, frankly, offensive things to help save the economy.”

That these questions are only being asked now, almost a year into the bailout and several months after the new administration has taken office, further highlights how the controlled corporate media is doing everything in its power to keep to well-trodden and uncontroversial areas in their interviewing of key administration officials.

This interview is testimony to the power of the citizen journalism movement that is attempting to hold those in power accountable for their actions. We can only hope that the Obama Administration lives up to their promise to be the “cyber” administration by allowing more such question-and-answer sessions in the future.

“Problematic for the country” Tim?

May I educate you on this petty little document you swore an oath to uphold against all enemies, foreign and domestic?

The US Constitution, Article I, Section 8:

To coin money, regulate the value thereof, and of foreign coin, and fix the standard of weights and measures;

That power rests in the United States Congress, NOT THE FEDERAL RESERVE OR TREASURY.

Congress is free to delegate that power as it sees fit but you are absolutely not empowered to interfere via bluster, threat or any other means Congressional Authority in this regard.

If you are unwilling to discharge your oath of office you must resign immediately.

If you attempt to subvert The Constitution of The United States you must be impeached, removed from office and, if there is evidence that the $24 trillion you are attempting to cover up the disposition of is in any way linked to any sort of favoritism or game-playing I argue that you must be brought to the dock and indicted on charges of conspiracy and public corruption.

1 thought on “Geithner: Auditing the Federal Reserve is a ‘line that we don’t want to cross’”