The Greatest Depression is already here.

– The Greatest Economic Collapse Is Coming:
“To give you an idea of how big a problem these deficits are, consider that the US government could tax its citizens 100% of their earnings and NOT have a balanced budget.” (!)

– Peter Schiff: Americans of this generation are gonna look back at the 1930s with jealousy about how good people had it back then (03/16/09)

– Interview with Gerald Celente: 2009 – The Worst Economic Collapse Ever (02/10/09):
In 2009 we’re going to see the worst economic collapse ever, the ‘Greatest Depression’, says Gerald Celente, U.S. trend forecaster. He believes it’s going to be very violent in the U.S., including there being a tax revolt. 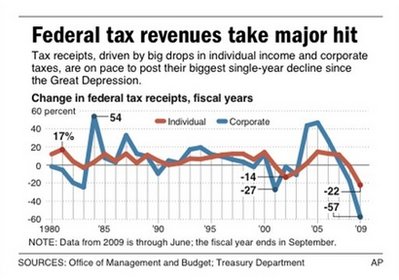 WASHINGTON – The recession is starving the government of tax revenue, just as the president and Congress are piling a major expansion of health care and other programs on the nation’s plate and struggling to find money to pay the tab.

The numbers could hardly be more stark: Tax receipts are on pace to drop 18 percent this year, the biggest single-year decline since the Great Depression, while the federal deficit balloons to a record $1.8 trillion.

The last time the government’s revenues were this bleak, the year was 1932 in the midst of the Depression.

“Our tax system is already inadequate to support the promises our government has made,” said Eugene Steuerle, a former Treasury Department official in the Reagan administration who is now vice president of the Peter G. Peterson Foundation.

“This just adds to the problem.”

While much of Washington is focused on how to pay for new programs such as overhauling health care — at a cost of $1 trillion over the next decade — existing programs are feeling the pinch, too.

Social Security is in danger of running out of money earlier than the government projected just a few month ago. Highway, mass transit and airport projects are at risk because fuel and industry taxes are declining.

The national debt already exceeds $11 trillion. And bills just completed by the House would boost domestic agencies’ spending by 11 percent in 2010 and military spending by 4 percent.

For this report, the AP analyzed annual tax receipts dating back to the inception of the federal income tax in 1913. Tax receipts for the 2009 budget year were available through June. They were compared to the same period last year. The budget year runs from October to September, meaning there will be three more months of receipts this year.

Is there a way out of the financial mess?

A key factor is the economy’s health. The future of current programs — not to mention the new ones Obama is proposing — will depend largely on how fast the economy recovers from the recession, said William Gale, co-director of the Tax Policy Center.

“The numbers for 2009 are striking, head-snapping. But what really matters is what happens next,” said Gale, who previously taught economics at UCLA and was an adviser to President George H. W. Bush’s Council of Economic Advisers.

“If it’s just one year, then it’s a remarkable thing, but it’s totally manageable. If the economy doesn’t recover soon, it doesn’t matter what your social, economic and political agenda is. There’s not going to be any revenue to pay for it.”

A small part of the drop in tax receipts can be attributed to new tax credits for individuals and corporations enacted in February as part of the $787 billion economic stimulus package. The sheer magnitude of the tax decline, however, points to the deep recession that is reducing incomes, wiping out corporate profits and straining government programs.

Social Security tax receipts are down less than a percentage point from last year, but in May the government had been projecting a slight increase. At the time, the government’s best estimate was that Social Security would start to pay out more money than it receives in taxes in 2016, and that the fund would be depleted in 2037 unless changes are enacted.

Some experts think the sour economy has made those numbers outdated.

“You could easily move that number up three or four years, then you’re talking about 2013, and that’s not very far off,” said Kent Smetters, associate professor of insurance and risk management at the University of Pennsylvania.

The government’s projections included best- and worst-case scenarios. Under the worst, Social Security would start to pay out more money than it received in taxes in 2013, and the fund would be depleted in 2029.

The fund’s trustees are still confident the solvency dates are within the range of the worst-case scenario, said Jason Fichtner, the Social Security Administration’s acting deputy commissioner.

“We’re not outside our boundaries yet,” Fichtner said. “As the recovery comes, we’ll see how that plays out.”

The recession’s toll on Social Security makes it even more urgent for Congress to address the fund’s long-term solvency, said Sen. Herb Kohl, D-Wis., chairman of the Senate Aging Committee.

“Over the past year, millions of older Americans have watched their retirement savings crumble, making the guaranteed income of Social Security more important than ever,” Kohl said.

Medicare tax receipts are also down less than a percentage point for the year, pretty close to government projections. Medicare started paying out more money than it received last year.

Meanwhile, the recession is taking a toll on fuel and industry excise taxes that pay for highway, mass transit and airport projects. Fuel taxes that support road construction and mass transit projects are on pace to fall for the second straight year. Receipts from taxes on jet fuel and airline tickets are also dropping, meaning Congress will have to borrow more money to fund airport projects and the Federal Aviation Administration.

Rep. Richard Neal, D-Mass., chairman of the House subcommittee that oversees fuel taxes, is working on a package to make the fund more self-sufficient. The U.S. Chamber of Commerce, which doesn’t back many tax increases, supports increasing the federal gasoline tax, currently 18.4 cents per gallon.

Neal said he hasn’t endorsed a specific plan. But, he added, “You can’t keep going back to the general fund.”