“Saud Masud, a real-estate analyst at UBS, said a decelerating price fall doesn’t necessarily point to market recovery. “The underlying trends are not supportive of a recovery in the market anytime soon,” he said.”

Related article:  In Dubai, guest workers are stranded without jobs 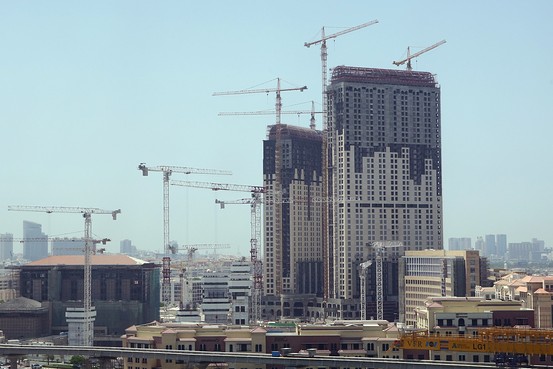 Property prices in Dubai are down 50% from their peak in the third quarter of 2008.

DUBAI — Home values in Dubai have fallen by about half from their peak late last year in the wake of the global real-estate slowdown, a widely watched index of Dubai property prices showed Monday.

Property prices in the emirate, which had been driven sharply higher in past years as foreign investors snapped up real estate, have been sliding since the third quarter of 2008.

But the decline showed signs of slowing in the second quarter, with prices falling 9% from a year earlier, after much steeper drops in previous quarters, U.K.-based real-estate consultancy Colliers International said in its quarterly price index. The measure, which collates mortgage transactions on properties open to foreign ownership since the start of 2007, is compiled using data from financial institutions accounting for 60% of the mortgage market in Dubai.

Like other places around the world, the emirate has been hit by a property slump as a result of the credit crunch.

However, Colliers said continuing concerns over the availability of financing, job-security worries for the emirate’s many expatriates and a lack of transparency about project delays and postponements continued to hamper the market’s recovery.

Property prices in Dubai were rising sharply as recently as the first half of last year. But since the third quarter of 2008, as the impact of the global crisis has drawn in on the emirate, real-estate agents have reported softening prices and a dearth of buyers, especially those buying investment properties which had earlier helped drive steep price increases.

Between April and June, the price of villas and townhouses was hardest hit, with prices falling 18% and 11%, respectively. Apartment prices, meanwhile, dipped 3%, Colliers said.

However, the rate of decline during the quarter “decelerated dramatically” from the start of the year, when prices slumped 42% between the fourth quarter of 2008 and the first quarter of 2009.

“After a significant decline in the first three months of the year, the market witnessed a deceleration in the rate of decline in residential prices in the second quarter,” Ian Albert, Colliers International regional director in Dubai, told Zawya Dow Jones in a telephone interview. “The magnitude of the decline that we saw in the first quarter was not, and is now very unlikely to be, repeated.”

Colliers said the deceleration was mainly due to the slow release of liquidity into the market by financial institutions, the restructuring of loan-to-value ratios and the relaxation of strict lending criteria, leading to a 50% rise in the number of property transactions during the second quarter from the first three months of the year.

“In the coming months the market will be searching for further evidence of market stabilization as we draw nearer to the bottom of market prices,” Mr. Albert said, adding that he was “cautiously optimistic” about the third quarter, even though figures will be distorted by the summer holidays and Ramadan.

Saud Masud, a real-estate analyst at UBS, said a decelerating price fall doesn’t necessarily point to market recovery. “The underlying trends are not supportive of a recovery in the market anytime soon,” he said.

The decline came after quarters of red-hot growth. Prices rose 42% in the first quarter of 2008, 16% in the second quarter and 5% in the third quarter, according to previous Colliers reports.

Write to Stefania Bianchi at stefania.bianchi@dowjones.com