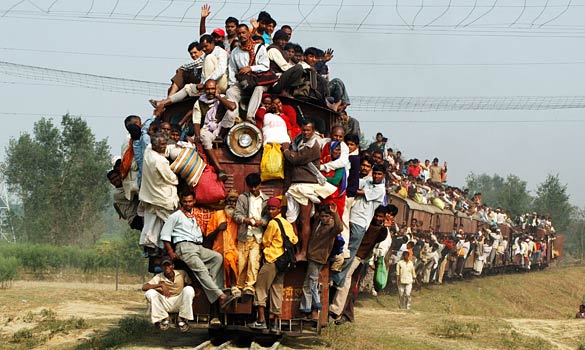 It is surely the biggest Big Brother project yet conceived. India is to issue each of its 1.2 billion citizens, millions of whom live in remote villages and possess no documentary proof of existence, with cyber-age biometric identity cards.

The Government in Delhi recently created the Unique Identification Authority, a new state department charged with the task of assigning every living Indian an exclusive number. It will also be responsible for gathering and electronically storing their personal details, at a predicted cost of at least £3 billion.

The task will be led by Nandan Nilekani, the outsourcing sage who coined the phrase “the world is flat”, which became a mantra for supporters of globalisation. “It is a humongous, mind-boggling challenge,” he told The Times. “But we have the opportunity to give every Indian citizen, for the first time, a unique identity. We can transform the country.”

If the cards were piled on top of each other they would be 150 times as high as Mount Everest – 1,200 kilometres.

India’s legions of local bureaucrats currently issue at least 20 proofs of identity, including birth certificates, driving licences and ration cards. None is accepted universally and moving from one state to the next can easily render a citizen officially invisible – a disastrous predicament for the millions of poor who rely on state handouts to survive.

It is hoped that the ID scheme will close such bureaucratic black holes while also fighting corruption. It may also be put to more controversial ends, such as the identification of illegal immigrants and tackling terrorism. A computer chip in each card will contain personal data and proof of identity, such as fingerprint or iris scans. Criminal records and credit histories may also be included.

Mr Nilekani, who left Infosys, the outsourcing giant that he co-founded, to take up his new job, wants the cards to be linked to a “ubiquitous online database” accessible from anywhere.

The danger, experts say, is that as one of the world’s largest stores of personal information, it will prove an irresistible target for identity thieves. “The database will be one of the largest that ever gets built,” Guru Malladi, a partner at Ernst & Young who was involved in an earlier pilot scheme, said. “It will have to be impregnable.”

Mr Nilekani will also have to mastermind a way of collecting trustworthy data. Only about 75 million people – or less than 7 per cent of the population – are registered to pay income tax. The Electoral Commission’s voter lists are thought to be largely inaccurate, not least because of manipulation by corrupt politicians.

He will also have to persuade as many as 60 government departments to co-operate. The Government has said that the first cards will be issued within 18 months. Analysts feel that it will take at least four years for the project to reach “critical mass”.

Such is the scale of the project that analysts believe India will have to develop a new electronics manufacturing base to supply information-storing servers, computer chips and card readers.

For the time being Mr Nilekani has more mundane matters on his mind. “I’ve only just left my previous job,” he said. “First I have to find a new office.”

Keeping tabs around the world

• ID cards are not used in the US, Canada, New Zealand, Australia, the Irish Republic or Nordic countries

• The Bush Administration resisted calls for an identity card in the US after the terrorist attacks on September 11, 2001

• Most identity cards contain the name, sex, date of birth and a unique number for the holder

• South Korean, Brazilian, Italian and Malaysian ID cards contain fingerprints. Cards in some countries contain information on any distinguishing marks of the holder

• Supporters say that they prevent illegal immigration and fraud