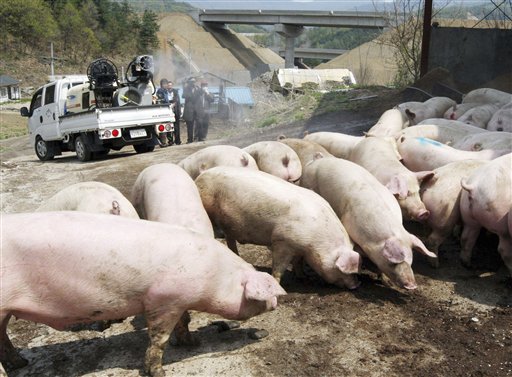 President Barack Obama said the threat of spreading infections is cause for concern but “not a cause for alarm.”

The WHO set its pandemic alert level at level 3, which means there is an animal virus that occasionally causes human cases but that doesn’t spread well between people. If the WHO raises it to 4 or 5, that signals that the swine flu virus is becoming increasingly adept at spreading between humans. That move could lead governments to set trade, travel and other restrictions aimed at limiting the disease’s spread.

In Luxembourg, European Union Health Commissioner Androulla Vassiliou urged Europeans to postpone nonessential travel to parts of the United States and Mexico affected by swine flu, toning down earlier comments referring to all of North America.

“I meant a travel advisory, not a travel ban, for travel to Mexico City and those states in the United States where we have outbreaks” of swine flu, he said.

The EU health commissioner only makes recommendations to the 27 member countries; they must make a final decision to set travel advisories through their foreign ministries.

Dr. Richard Besser, acting head of the Centers for Disease Control and Prevention in Atlanta, said the EU recommendation was not warranted. “At this point I would not put a travel restriction or recommendation against coming to the United States.”

“These are early days. It’s quite clear that there is a potential for this virus to become a pandemic and threaten globally,” WHO spokesman Peter Cordingley told AP Television News.

Spain’s first swine flu case – confirmed by the WHO – was a young man in the town of Almansa who recently returned from Mexico for university studies and is responding well to treatment, said Health Minister Trinidad Jimenez. Neither the young man nor any of the 20 other people under observation for the virus were in serious condition.

Three New Zealanders recently home from Mexico were suspected of having swine flu. Israel has put two people under observation, while France and Brazil have also reported suspected cases.

Cordingley singled out air travel as an easy way the virus could spread, noting that the WHO estimates that up to 500,000 people are on planes at any time.

Governments in Asia – with potent memories of SARS and avian flu outbreaks – heeded the warning amid global fears of a pandemic.

Singapore, Thailand, Japan, Indonesia, and the Philippines dusted off thermal scanners used during the 2003 SARS crisis and were checking for signs of fever among passengers arriving from North America. South Korea and Indonesia introduced similar screening.

In Malaysia, health workers in face masks took the temperatures of passengers as they arrived on a flight from Los Angeles.

Russia, Hong Kong and Taiwan said visitors returning from flu-affected areas with fevers would be quarantined.

Australian Health Minister Nicola Roxon said pilots on international flights would be required to file a report noting any flu-like symptoms among passengers before being allowed to land in Australia.

China said anyone experiencing flu-like symptoms within two weeks of arrival had to report to authorities.

India will start screening people arriving from Mexico, the United States, Canada, New Zealand, Spain, Britain and France for flu-like symptoms, said Vineet Chawdhry, a top Health Ministry official. It also will contact people who have arrived from Mexico and other affected countries in the past 10 days to check for the symptoms, he said.

Some officials cautioned that the checks might not be enough.

The virus could move between people before any symptoms show up, said John Simon, a scientific adviser to Hong Kong’s Center for Health Protection.

Thomas Tsang, controller for Hong Kong’s Center for Health Protection, said the government and universities aim to develop a test for the new flu strain in a week or two that will return results in four to six hours, compared with existing tests that can take 2-3 days.

China and Russia banned imports of pork and pork products from Mexico and three U.S. states that have reported cases of swine flu, and other governments were increasing their screening of pork imports.

Indonesia, which was hit hardest by bird flu, said it was banning all pork imports.

Lebanon’s agriculture ministry also banned all imports of pork and pork products, excluding some canned products. It also says it will destroy any pork shipments to have entered Lebanon from a country declared infected with the swine flu virus by the WHO or countries with suspected cases.

The CDC says people cannot get the flu by eating pork or pork products.

Germany’s largest tour operator, the Hannover-based TUI, suspended all charter flights to Mexico City through May 4. The suspension includes flights operated by TUI itself and also through companies 1-2 Fly, Airtours, Berge & Meer, Grebeco and L’tur.

TUI said other holiday trips to Mexico would continue to operate but would not make stops in Mexico City “for the next few weeks.” Japan’s largest tour agency, JTB Corp., suspended tours to Mexico at least through June 30.

Russian travel agencies said 30 percent of those planning to travel to Mexico in early May had already canceled.

At Madrid’s Barajas International Airport, passengers arriving from Mexico were asked to declare where they had been in Mexico and whether they had felt any cold symptoms. They were told to leave a contact address and phone number.

“Where we were, there was no real alarm but we followed what was happening on the news and we’re a little bit worried,” said Spaniard Filomeno Ruiz, back from vacation in Cancun.

Passengers were also urged to contact health authorities if they notice any symptoms in the 10 days following arrival.

In the airport’s baggage claim area, ground crews and police wore surgical face masks. Some travelers took precautions even though they had not been in Mexico.

“Nobody has recommended it, but I’ve put the mask on out of precaution,” said Roger Holmes of Britain, who was traveling to Tunisia from Madrid. “I’m not afraid, but it costs nothing to be careful.”

New Zealand Health Minister Tony Ryall said two students and a parent among a group of 15 who just came back from a class trip to Mexico had mild flu and were being tested for swine flu. On Sunday, officials said nine students and one teacher from a separate group that also were in Mexico “likely” have swine flu.

All the New Zealand students and teachers along with their families had voluntarily quarantined themselves at home. Ryall said three small groups of returned travelers were being monitored after reporting flu symptoms following recent trips to North America. He gave no other details.