– Obama Orders Treasury Chief to Try to Block AIG Bonuses (New York Times)
“Under these circumstances, it’s hard to understand how derivative traders at A.I.G. warranted any bonuses at all, much less $165 million in extra pay,” Mr. Obama said. “How do they justify this outrage to the taxpayers who are keeping the company afloat?” 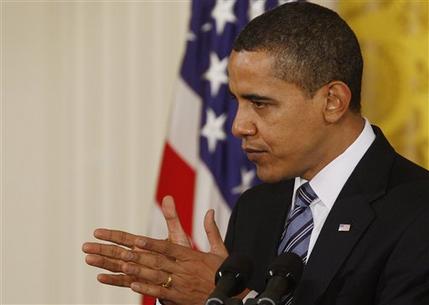 Senator Barack Obama received a $101,332 bonus from American International Group in the form of political contributions according to Opensecrets.org. The two biggest Congressional recipients of bonuses from the A.I.G. are – Senators Chris Dodd and Senator Barack Obama.

The A.I.G. Financial Products affiliate of A.I.G. gave out $136,928, the most of any AIG affiliate, in the 2008 cycle. I would note that A.I.G.’s financial products division is the unit that wrote trillions of dollars’ worth of credit-default swaps and “misjudged” the risk.

With the anger and rage that is being exhibited against A.I.G., perhaps the bonuses Obama received from A.I.G. explain Obama’s A.I.G crocodile tears.

Now that the Wall street Journal has revealed that A.I.G. paid bonuses of $1 million or more to 73 employees, it’s time to ask if recipients of A.I.G. “bonuses,” including President Obama, will give what now ought to be taxpayer money back?