Isaac Meng, an economist with BNP Paribas in Beijing, said it was unrealistic to expect China to remain immune to what he called the sharpest drop in global trade in 80 years.

China succumbed to the global economic downturn as Chinese exports slid 25.7 percent from a year earlier. 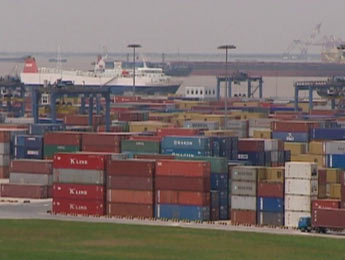 Reuters – China’s exports tumbled in February as the world’s third-largest economy felt the full force of the global financial crisis, but capital spending accelerated with the help of the government’s massive stimulus package.

With the world experiencing its deepest recession in decades, pessimists said the slump in exports was unlikely to end soon. Some said China could even record a trade deficit before long.

But optimists saw fresh hope in the more forward-looking investment data that China might pull out of its swoon faster than other major economies thanks to the government’s pump-priming and galloping credit growth.

“China has finally and spectacularly succumbed to the world financial crisis on the export side, and it’s difficult to see why that would improve in the short term,” said Paul Cavey, an economist at Macquarie Securities in Hong Kong.

Exports in February slid 25.7 percent from a year earlier, dwarfing forecasts of a 5.0 percent fall, while imports dropped 24.1 percent, close to projections of a 25.0 percent decline.

The drop in exports was the steepest since bankers started keeping records in 1993.

The resulting trade surplus was $4.84 billion, a three-year low, compared with $39.1 billion in January and a record $40.1 billion in November, the customs administration said on its website, www.customs.gov.cn.

The drop in the surplus to well below the forecast $27.3 billion figure, sparked broad dollar buying. [ID:nT1527]

Chinese exporters had hitherto fared better than their competitors in places such as South Korea and Taiwan, encouraging conjecture that cost-conscious shoppers in the West were trading down to cheaper made-in-China goods.

But Isaac Meng, an economist with BNP Paribas in Beijing, said it was unrealistic to expect China to remain immune to what he called the sharpest drop in global trade in 80 years.

“It will have a pretty big impact on Chinese domestic demand,” Meng said of last month’s dive in overseas shipments.

“Probably 60-70 million workers directly work in these export sectors, so there will be secondary impacts on capital expenditure, employment and consumption,” he said.

The government estimates that 20 million migrant workers, who labour mainly in export factories and in construction, have lost their jobs so far because of a collapse in global demand and a slump in the domestic real estate market.

Mei Xinyu, a researcher with the Ministry of Commerce, said the slump in exports was likely to last at least until mid-year.

“Any recovery in the export sector will not take place until the third or even the fourth quarter of this year,” he said.

But other figures released earlier by the National Bureau of Statistics suggested that the government is already enjoying some success in its drive to make up for the shortfall in exports by boosting capital spending.

Investment in urban areas in fixed assets such as roads, power plants and apartment buildings rose 26.5 percent in January and February from a year earlier, easily beating market forecasts of a 21.5 percent increase.

“The figure shows the economy is doing very well and Beijing’s stimulus package is working,” said Jiang Chao, an analyst at Guotai Junan Securities in Shanghai.

The combined number is meant to smooth out distortions caused by the Lunar New Year, which fell in January this year but in February last year.

Yu Song and Helen Qiao at Goldman Sachs said the rebound in investment came sooner than they had expected, increasing the likelihood of an upside revision to their forecast of domestic demand.

A breakdown pointed to the initial impact of the 4 trillion yuan ($585 billion) stimulus plan unveiled in November.

Spending on projects backed by the central government rose 40.3 percent in the first two months, while investment in transport, including railways, rose a whopping 210.1 percent.

“There’s no doubt that fixed-asset investment will be on an upward trend in the first half of this year, given the capital being injected into infrastructure and public housing,” said Lu Zhengwei, chief economist at Industrial Bank in Shanghai.

Bank lending is surging; cement and steel output rose 17 percent and 2.4 percent, respectively, in the first two months, while the decline in power demand slowed; and car sales topped 800,000 in February for the first time in eight months.

But other statistics suggest China is not out of the woods yet. Investment in China’s glutted real estate sector was just 1.0 percent higher than in the first two months of last year; inventories of raw materials such as coal have started to mount again; and a rise in prices of steel proved to be short-lived.