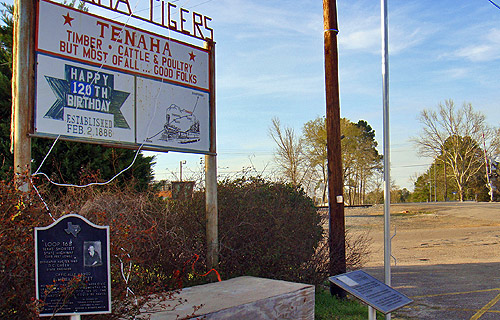 The Tenaha, Texas welcome sign on March 3. The tiny east Texas town is making money by pulling over black motorists and seizing their cash and property without charging them with any crime.
A lawsuit alleges that the town’s police pull over motorists — especially African Americans — and extort money and valuables by threatening criminal charges or worse.

Reporting from Tenaha, Texas — You can drive into this dusty fleck of a town near the Texas-Louisiana state line if you’re African American, but you might not be able to drive out of it — at least not with your car, your cash, your jewelry or other valuables.

That’s because the police here allegedly have found a way to strip motorists, many of them black, of their property without ever charging them with a crime. Instead they offer out-of-towners a grim choice: Sign over your belongings to the town, or face felony charges of money laundering or other serious crimes.

Crime or no crime, motorists pay

More than 140 people reluctantly accepted that deal from June 2006 to June 2008, according to court records. Among them were a black grandmother from Akron, Ohio, who surrendered $4,000 in cash after Tenaha police pulled her over, and an interracial couple from Houston, who gave up more than $6,000 after police threatened to seize their children and put them into foster care, the court documents show. Neither the grandmother nor the couple were charged with or convicted of any crime.

Officials in Tenaha, along a heavily traveled state highway connecting Houston with several popular gambling destinations in Louisiana, say they are engaged in a battle against drug trafficking, and they call the search-and-seizure practice a legitimate use of the state’s asset-forfeiture law. That law permits local police agencies to keep drug money and other property used in the commission of a crime and add the proceeds to their budgets.

“We try to enforce the law here,” said George Bowers, mayor of the town of about 1,100 residents, where boarded-up businesses outnumber open ones and City Hall sports a broken window. “We’re not doing this to raise money. That’s all I’m going to say at this point.”

But civil rights lawyers call Tenaha’s practice something else: highway robbery. The attorneys have filed a federal class-action lawsuit seeking unspecified damages and a halt to what they contend is an unconstitutional perversion of the law’s intent, used primarily against African Americans who have done nothing wrong.

Tenaha officials “have developed an illegal ‘stop and seize’ practice of targeting, stopping, detaining, searching, and often seizing property from apparently nonwhite citizens and those traveling with nonwhite citizens,” asserts the lawsuit, which was filed in U.S. District Court in the Eastern District of Texas.

The property seizures are not happening just in Tenaha. In southern parts of Texas near the Mexican border, for example, Latinos allege that they are being singled out.

According to a prominent Texas state legislator, police agencies across the state are wielding the asset-forfeiture law more aggressively to supplement their shrinking operating budgets.

“If used properly, it’s a good law-enforcement tool to see that crime doesn’t pay,” said Democratic state Sen. John Whitmire, chairman of the Senate’s Criminal Justice Committee. “But in this instance, where people are being pulled over and their property is taken with no charges filed and no convictions, I think that’s theft.”

David Guillory, an attorney in nearby Nacogdoches who filed the federal lawsuit, said he combed through Shelby County court records from 2006 to 2008 and discovered nearly 200 cases in which Tenaha police seized cash and property from motorists. In about 50 of the cases, suspects were charged with drug possession.

But in 147 others, Guillory said the court records showed, the police seized cash, jewelry, cellphones and sometimes even automobiles from motorists but never found any contraband or charged them with any crime. Of those, Guillory said he managed to contact 40 of the motorists directly — and discovered that all but one of them were black.

“The whole thing is disproportionately targeted toward minorities, particularly African Americans,” Guillory said. “Every one of these people is pulled over and told they did something, like, ‘You drove too close to the white line.’ That’s not in the penal code, but it sounds plausible. None of these people have been charged with a crime; none were engaged in anything that looked criminal. The sole factor is that they had something that looked valuable.”

In some cases, police used the fact that motorists were carrying large amounts of cash as evidence that they must have been involved in laundering drug money, even though Guillory said each of the drivers he contacted could account for where the money had come from and why they were carrying it — such as for a gambling trip to Shreveport, La., or to purchase a used car from a private seller.

Once the motorists were detained, the police and the Shelby County district attorney quickly drew up legal papers presenting them with an option: Waive their rights to their cash and property or face felony charges for crimes such as money laundering — and the prospect of having to hire a lawyer and return to Shelby County multiple times to contest the charges in court.

The process apparently is so routine in Tenaha that Guillory discovered pre-signed and pre-notarized police affidavits with blank spaces left for an officer to fill in a description of the property being seized.

Jennifer Boatright, her husband and two young children — a mixed-race family — were traveling from Houston to visit relatives in East Texas in April 2007 when Tenaha police pulled them over, alleging that they were driving in a left-turn lane.

After searching the car, the officers discovered what Boatright said was a gift for her sister: a small, unused glass pipe made for smoking marijuana. Although they found no drugs or other contraband, the police seized $6,037 that Boatright said the family was carrying to purchase a used car — and then threatened to turn their children, ages 10 and 1, over to Child Protective Services if the couple didn’t agree to sign over their right to their cash.

“It was give them the money or they were taking our kids,” Boatright said. “They suggested that we never bring it up again. We figured we better give them our cash and get the hell out of there.”

Several months later, after Boatright and her husband contacted an attorney, Tenaha officials returned their money but offered no explanation or apology. The couple remain plaintiffs in the federal lawsuit.

Except for Tenaha’s mayor, none of the defendants in the federal lawsuit, including Shelby County Dist. Atty. Lynda Russell and two Tenaha police officers, responded to requests for comment about their search-and-seizure practices. Lawyers for the defendants also declined to comment, as did several of the plaintiffs in the lawsuit.

But Whitmire says he doesn’t need to await the suit’s outcome to try to fix what he regards as a statewide problem. On Monday, he introduced a bill in the state Legislature that would require police to go before a judge before attempting to seize property under the asset-forfeiture law — and ultimately Whitmire hopes to tighten the law further so that law-enforcement officials will be allowed to seize property only after a suspect is charged and convicted in a court.

“The law has gotten away from what was intended, which was to take the profits of a bad guy’s crime spree and use it for additional crime fighting,” Whitmire said. “Now it’s largely being used to pay police salaries — and it’s being abused because you don’t even have to be a bad guy to lose your property.”