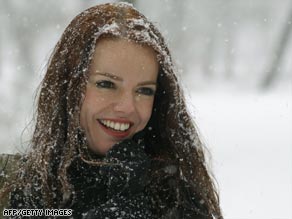 A woman enjoys the snow in Madrid, where the airport suspended flights because of the weather.

“It’s a huge snowstorm. You don’t see this in Madrid often,” an airport spokeswoman said.

The airport has 1,205 daily inbound and outbound flights. But for the first time, the airport halted operations due to a weather problem, the spokeswoman said.

The temporary shutdown began about noon (6 a.m. ET). Visibility was low, and the storm was so intense that the airport’s snow clearing and de-icing equipment couldn’t keep up, said the spokeswoman, who by custom is not identified.

The first plane to depart when the airport reopened was a Finnair flight bound for Helsinki, a second spokeswoman said.

The delays from the storm affected hundreds of travelers at the airport. Many others could not even reach the airport because of poor road conditions.

Madrid is one of the highest capitals in Europe, at an elevation of 646 meters or 2,120 feet, but it does not often snow in the city itself, especially with the ferocity seen Friday.

As children and even some adults gleefully tossed snowballs, city officials urged motorists to stay off the roads and use public transportation.

Large traffic jams formed on the major highways leading from Madrid to Barcelona and other cities, and numerous vehicles ran off the roads and got stuck in the snow. iReport: Are you snowed in in Spain? Send us your photos, videos

Bus service was suspended in many areas, although subways and commuter trains were operating, with delays in some cases.

Weather forecasters said the snow was expected to continue through Saturday morning, although diminishing in intensity.