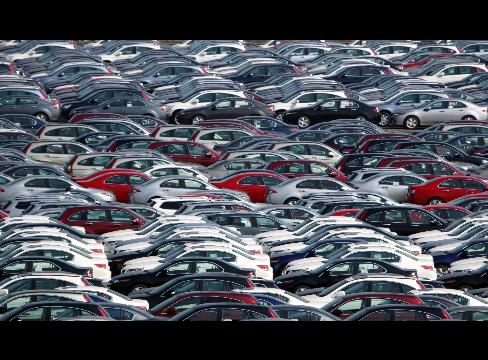 “Given the speed and the length of the contraction, this recession could be the most severe in the postwar era,” Morita said. “We expect negative growth will continue for a fifth straight quarter to the April-June period of 2009.”

Plunging sales of cars and electronics are forcing companies from Toyota Motor Corp. to Panasonic Corp. to idle plants and fire workers. The Nikkei 225 Stock Average tumbled a record 42 percent this year, eclipsing a 39 percent slide in 1990 that helped trigger a decade of economic stagnation and deflation.

A 12.1 percent annualized contraction would be the steepest since the first quarter of 1974, when the oil shock caused the economy to shrink 13.1 percent, according to Barclays.

Panasonic Electric Works Co., a Panasonic subsidiary, said this week that it plans to shut three factories and eliminate 1,000 jobs by the year ending March 2011. Aeon Co., Japan’s largest supermarket operator, will cut spending on stores at home and slow expansion in China.

Production plummeted 8.1 percent in November from October, the most since comparable data were first kept 55 years ago. Companies surveyed said they planned to reduce output a further 8 percent this month and 2.1 percent in January. Exports slid an unprecedented 26.7 percent last month from a year earlier.

The numbers were “shocking,” Morita said. “Exports are dropping at a very rapid pace and capital investment also is fizzling.”

The data prompted other economists to revise their GDP projections. Bank of America Corp. now predicts an annualized 6.5 percent contraction from a 2.7 percent drop previously estimated.

“External demand has vanished all of a sudden,” Tomoko Fujii, head of Japan economics and strategy at Bank of America in Tokyo. “Almost every industrialized nation is in a recession. Even in China, growth is slowing sharply.”

“I couldn’t believe my eyes when I calculated the figures,” said Takuto Murase, a Tokyo-based economist at the researcher, which is owned by Sumitomo Mitsui Financial Group Inc. “This could be the worst contraction in the postwar era.”

The most severe financial crisis since the Great Depression is spreading from industrialized nations to developing markets including Asia, the destination for about half of Japan’s exports. Consumers at home are unlikely to pick up the slack, with household confidence at a record low and job prospects worsening.

“This is the toughest climate I’ve seen,” said Aeon Chief Financial Officer Masaaki Toyoshima, who began working for the retailer in 1974. “It’s looking tougher by the month.”

Deflation may return next year as the recession deepens, the yen extends its gains and companies restrain wages to protect profits, the Economist Intelligence Unit wrote in a report published today. Consumer-price inflation eased the most in a decade in November as prices of oil and other commodities slumped.

“Many parts of the economy are already suffering from deflation,” the London-based EIU said. “The poor outlook for the economy will continue to restrict companies’ pricing power, and real wages are forecast to continue falling in 2009.”

Policy makers have little scope to respond. The Bank of Japan has already cut its benchmark interest rate to 0.1 percent and started buying short-term corporate debt. Any extra spending by the government risks swelling the public debt, which is already the world’s largest at more than 170 percent of GDP.

Prime Minister Taro Aso has yet to get parliamentary approval for plans to spend about 10 trillion yen ($111 billion) to support households and the unemployed. Aso, whose approval rating fell 10 points to 21 percent in a Nikkei newspaper survey published this week, has to call a general election by September.

“Given that Aso is struggling to show his political leadership, the fiscal policy that could influence Japan’s economy will be the U.S.’s and China’s, not be Japan’s,” Morita said. “Even once Japan eventually recovers, the economy will still depend on exports.”