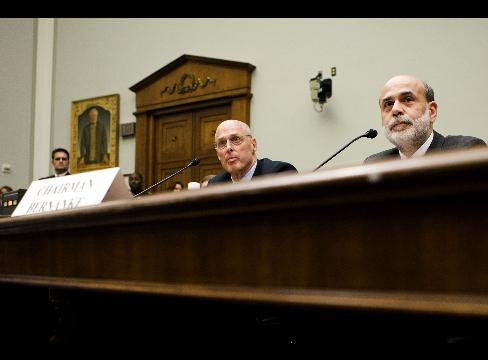 Oct. 9 (Bloomberg) — Federal Reserve Chairman Ben S. Bernanke and Treasury Secretary Henry Paulson are discovering both the leeway and limits they have as policy makers as they struggle to combat the 14-month-old credit crisis.

The two have worked to come up with novel strategies, including a complex plan for the Fed to backstop the everyday finances of corporate America by buying commercial paper, and potential injections of capital into banks. So far, they’ve made scant progress in restoring calm to the markets and are turning abroad for help, including joint interest-rate cuts yesterday.

“The relative position of the U.S. in the world economy and the world of finance is much lower than it used to be,” said Allen Sinai, chief economist at Decision Economics in New York. “With markets so global, so interconnected, we need a more unified approach to fighting the world financial crisis.”

Which proves more important in the end — the continued creativity of Bernanke and Paulson in fashioning policies to tackle the turmoil or the intractability of the now global crisis facing them — will go a long way in determining whether a developing global recession turns into something even worse.

Even as Paulson reached across borders, he played down the likelihood of the U.S. backing a U.K. proposal to extend guarantees to loans between banks. The Treasury chief told reporters yesterday that it might “not make sense to have identical policies” because each countries’ circumstances are different.

Along with the Fed’s half-point reduction in its benchmark rate, central banks from the European Central Bank to the People’s Bank of China lowered borrowing costs yesterday.

The coordinated rate cuts may presage a period in which foreign central bankers and finance ministers take up more of the burden of combating a crisis that Bernanke and Paulson are finding hard to contain on their own.

Policy makers from the Group of Seven industrial nations — Britain, Canada, France, Germany, Italy, Japan and the U.S. — meet tomorrow, and how to handle the turmoil is at the top of their agenda.

“The G-7 governments are going to try all kinds of measures to try to get cross-border flows going to unleash locked-up credit markets,” said Adam Posen, deputy director of the Peterson Institute for International Economics in Washington.

Likely steps include further rate reductions in coming weeks and using taxpayer money to replenish capital at loss-ridden banks, with a slight chance of some nations extending guarantees to loans between them. One focus, according to Posen: attempting to find a way to get money moving from countries with record trade surpluses and currency reserves to countries where credit is scarce.

“We should not underestimate the joint power of fully committed global policy makers — markets will take notice and turn around,” said Marco Annunziata, chief economist at Unicredit MIB in London. “Policy makers must keep hitting the markets with decisive measures in the coming days.”

U.S. action so far is unprecedented in scale since the Great Depression. In the past five weeks alone, the government has taken over mortgage-finance firms Fannie Mae and Freddie Mac, rescued insurer American International Group Inc., backed the deposits of money-market funds and authorized a $700 billion bank rescue program.

In putting together those measures, policy makers stretched the limits of what they can do under the law. The Fed has repeatedly invoked emergency powers only available to it at times of “unusual and exigent circumstances” to extend credit of up to $123.8 billion to AIG and set up its commercial-paper program.

And U.S. policy makers aren’t finished yet. Paulson yesterday signaled he’s considering pumping capital into U.S. financial institutions, saying “we will use all of the tools we’ve been given to maximum effectiveness” under the $700 billion Troubled Asset Relief Program.

Barclays Capital Inc., Macroeconomic Advisers LLC and other forecasters predict the Fed will cut rates by another half-point this month to 1 percent. That would match the lowest level in five decades.

“Policy makers want to get as much stimulus into the system as soon as possible,” said Brian Sack, a former Fed economist now at Macroeconomic Advisers in Washington.

Yet for all these efforts, investors remain unnerved and financial markets are in turmoil. U.S. stock indexes fell for a sixth day yesterday, plummeting 16 percent in that period.

Behind the panic: fear that Bernanke and Paulson have yet to get ahead of a problem that’s now morphed from a U.S. housing recession into a global financial meltdown.

To finally beat the crisis, policy makers outside the U.S. may have to show the same flexibility as their U.S. counterparts. The markets were unnerved earlier this week after a summit of European leaders concluded without a comprehensive, cross-border remedy for their banks’ deepening woes, forcing countries to go it alone.

“It’s going to take a while to work through this problem,” Paulson said yesterday. “Some financial institutions will fail” even after the U.S. actions, he said.