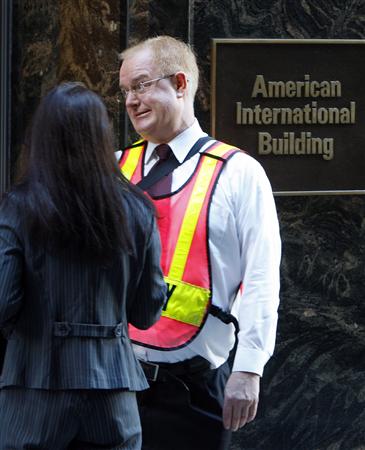 Benchmark indexes crossed between gains and losses more than 25 times, and AIG pared most of a 74 percent decline, as investors weighed the fate of the largest U.S. insurer after credit-market losses forced Lehman Brothers Holdings Inc. into bankruptcy. Merrill Lynch & Co. led a 6.2 percent rally in the S&P 500 Financial Index a day after the measure of banks, brokerages and insurers plunged the most since at least 1989.

“This is a market that’s not looking at fundamentals,” said Quincy Krosby, who helps manage $380 billion as chief investment strategist at the Hartford in Hartford, Connecticut. “It’s going back and forth based on rumor and headlines and it has temporarily divorced itself from fundamental analysis.”

The U.S. overcame declines that pushed down equity prices around the world, led by a 17 percent plunge in Russia’s Micex index, as overnight lending rates doubled and concern grew AIG would collapse. Each of the 10 main industry groups in the S&P 500 advanced except for telephone companies and utilities.

The S&P 500 plunged as much as 2 percent in the morning. Stocks recovered as speculation grew that the Fed would cut interest rates, only to lose those gains after the central bank left borrowing costs unchanged.

The last-hour rally came as federal regulators considered reversing a decision not to help AIG avoid collapse. People involved in the talks between AIG and the government are “cautiously optimistic,” said the person, who declined to be identified because negotiations are confidential.

AIG slid $1.01, or 21 percent, to $3.75, recovering from a tumble of as much as $3.51 after the insurer’s credit ratings were cut. The company’s potential demise could result in $180 billion of losses for financial institutions, according to RBC Capital Markets analyst Hank Celenti.

“The market may be taking the point of view that the Fed is the only one with the financial wherewithal to backstop the perceived problems of AIG,” said Keith Wirtz, chief investment officer at Fifth Third Asset Management Inc. in Cincinnati, which oversees $22 billion. “Things feel like they’re spiraling, and the Fed may be the only one in a position to stop this at the AIG level.”

Wells Fargo & Co., the biggest U.S. bank on the West Coast, rallied 13 percent to $34.93 after Credit Suisse Group AG said Lehman’s bankruptcy will have a “modest” effect on the company.

Banks, brokerages, insurers and real estate investment trusts made up the 20 biggest gains in the S&P 500. The S&P 500 Financials Index’s 6.2 percent advance was its biggest since July.

Washington Mutual Inc. advanced 16 percent to $2.32, erasing a tumble of as much as 25 percent, after the Daily Mail said JPMorgan Chase & Co. is in “advanced talks” to buy WaMu. The savings and loan also climbed after saying it doesn’t expect a “material” effect from S&P’s decision to cut its credit rating to junk.

Travelers Cos. and Chubb Corp. led a rally by competitors of AIG after analysts said insurers may benefit as the company struggles with liquidity.

Monsanto Co. gained 7.6 percent to $112.97 for the biggest increase since March. The world’s largest seed producer said its fiscal full-year profit rose more than previously forecast after weed-killer and seed sales climbed. Profit from ongoing operations was $3.58 to $3.60 a share in the year through August, compared with a previous forecast of $3.37, Monsanto said.

Constellation Energy Group Inc. tumbled 36 percent to $30.76. The biggest U.S. power marketer had the steepest drop in the S&P 500 on concern credit market turmoil will hurt the company’s search for a partner to share the risk of its burgeoning energy-trading business.

The S&P 500 plunged 4.7 percent yesterday after Lehman filed for bankruptcy protection and Merrill was taken over by Bank of America Corp. The benchmark for U.S. equities has fallen 17 percent this year and is poised to post its first yearly retreat since 2002 after global banks racked up more than $514 billion in credit losses and asset writedowns stemming from the worst U.S. housing slump since the Great Depression.

The S&P 500 Financials Index slumped as much as 3.7 percent in early trading today as the overnight dollar rate soared 3.33 percentage points to 6.44 percent today, a record jump, the British Bankers’ Association said. The rate was 2.19 percent a month ago and 2.15 percent last week.

Stocks also advanced as oil for October delivery lost $4.22 to $91.49 a barrel in New York on concern that turmoil on Wall Street may weaken the global economy and cut fuel demand.

The S&P 500 Consumer Discretionary Index climbed 0.6 percent, helped in part by a Labor Department report showing the cost of living in the U.S. dropped in August for the first time in almost two years as falling fuel costs and a slowing economy cooled inflation. The government’s consumer price index decreased 0.1 percent.

Almost 2.2 billion shares changed hands on the NYSE, the most since June 27 and 60 percent more than the three-month daily average.

To contact the reporter on this story: Lynn Thomasson in New York at lthomasson@bloomberg.net.