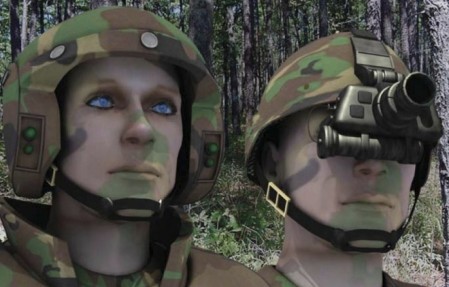 These are just a few of the military uses imagined for cognitive science — and if it’s not yet certain whether the technologies will work, the military is certainly taking them very seriously.

“It’s way too early to know which — if any — of these technologies is going to be practical,” said Jonathan Moreno, a Center for American Progress bioethicist and author of Mind Wars: Brain Research and National Defense. “But it’s important for us to get ahead of the curve. Soldiers are always on the cutting edge of new technologies.”

Moreno is part of a National Research Council committee convened by the Department of Defense to evaluate the military potential of brain science. Their report, “Emerging Cognitive Neuroscience and Related Technologies,” was released today. It charts a range of cognitive technologies that are potentially powerful — and, perhaps, powerfully troubling.

Here are the report’s main areas of focus:

Like Moreno said, it’s too early to say what will work. The report documents in great detail the practical obstacles to these aims — not least the failure of reductionist neuroscientific models, in which a few firing neurons can be easily mapped to a psychological state, and brains can be analyzed in one-map-fits-all fashion.

But given the rapid progress of cognitive science, it’s foolish to assume that obstacles won’t be overcome. Hugh Gusterson, a George Mason University anthropologist and critic of the military’s sponsorship of social science research, says their attempt to crack the cultural code is unlikely to work — “but my sense with neuroscience,” he said, “is a far more realistic ambition.”

Gusterson is deeply pessimistic about military neuroscience, which will not be limited to the United States.

“I think most reasonable people, if they imagine a world in which all sides have figured out how to control brains, they’d rather not go there,” he said. “Most rational human beings would believe that if we could have a world where nobody does military neuroscience, we’ll all be better off. But for some people in the Pentagon, it’s too delicious to ignore.”

Note: The NRC committee is formally known as the Committee on Military and Intelligence Methodology for Emergent Neurophysiological and Cognitive/Neural Science Research in the Next Two Decades. In the future, cognitive technologies will apparently obviate the need for snappy, easily-acronymed titles.