If the situation would not be so damn serious, this would be very funny.
Maybe it’s still funny, if you “Always look on the bright side of life”.

WASHINGTON – A panel of top business leaders testified before Congress about the worsening recession Monday, demanding the government provide Americans with a new irresponsible and largely illusory economic bubble in which to invest.

“What America needs right now is not more talk and long-term strategy, but a concrete way to create more imaginary wealth in the very immediate future,” said Thomas Jenkins, CFO of the Boston-area Jenkins Financial Group, a bubble-based investment firm. “We are in a crisis, and that crisis demands an unviable short-term solution.” 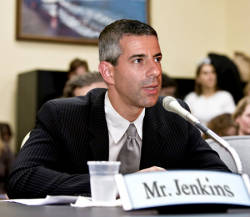 The current economic woes, brought on by the collapse of the so-called “housing bubble,” are considered the worst to hit investors since the equally untenable dot-com bubble burst in 2001. According to investment experts, now that the option of making millions of dollars in a short time with imaginary profits from bad real-estate deals has disappeared, the need for another spontaneous make-believe source of wealth has never been more urgent.

“Perhaps the new bubble could have something to do with watching movies on cell phones,” said investment banker Greg Carlisle of the New York firm Carlisle, Shaloe & Graves. “Or, say, medicine, or shipping. Or clouds. The manner of bubble isn’t important-just as long as it creates a hugely overvalued market based on nothing more than whimsical fantasy and saddled with the potential for a long-term accrual of debts that will never be paid back, thereby unleashing a ripple effect that will take nearly a decade to correct.” 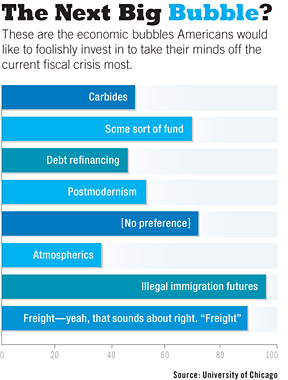 Congress is currently considering an emergency economic-stimulus measure, tentatively called the Bubble Act, which would order the Federal Reserve to† begin encouraging massive private investment in some fantastical financial scheme in order to get the nation’s false economy back on track.

Current bubbles being considered include the handheld electronics bubble, the undersea-mining-rights bubble, and the decorative office-plant bubble. Additional options include speculative trading in fairy dust-which lobbyists point out has the advantage of being an entirely imaginary commodity to begin with-and a bubble based around a hypothetical, to-be-determined product called “widgets.”

The most support thus far has gone toward the so-called paper bubble. In this appealing scenario, various privately issued pieces of paper, backed by government tax incentives but entirely worthless, would temporarily be given grossly inflated artificial values and sold to unsuspecting stockholders by greedy and unscrupulous entrepreneurs.

“Little pieces of paper are the next big thing,” speculator Joanna Nadir, of Falls Church, VA said. “Just keep telling yourself that. If enough people can be talked into thinking it’s legitimate, it will become temporarily true.”

Demand for a new investment bubble began months ago, when the subprime mortgage bubble burst and left the business world without a suitable source of pretend income. But as more and more time has passed with no substitute bubble forthcoming, investors have begun to fear that the worst-case scenario-an outcome known among economists as “real-world repercussions”-may be inevitable.

“Every American family deserves a false sense of security,” said Chris Reppto, a risk analyst for Citigroup in New York. “Once we have a bubble to provide a fragile foundation, we can begin building pyramid scheme on top of pyramid scheme, and before we know it, the financial situation will return to normal.”

Despite the overwhelming support for a new bubble among investors, some in Washington are critical of the idea, calling continued reliance on bubble-based economics a mistake. Regardless of the outcome of this week’s congressional hearings, however, one thing will remain certain: The calls for a new bubble are only going to get louder.

“America needs another bubble,” said Chicago investor Bob Taiken. “At this point, bubbles are the only thing keeping us afloat.”