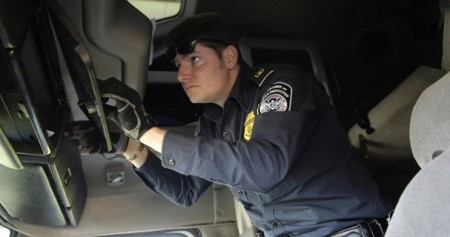 Border check: A Customs and Border Protection officer searched a truck at a border crossing in Blaine, Wash., in 2006. For the past 18 months, officials at border entries have been searching some citizens’ laptops. (Andy Nelson – Staff/File)

Courts have upheld routine checks of Americans’ hard drives at the border. Critics say they’re anything but routine.

New York – Is a laptop searchable in the same way as a piece of luggage? The Department of Homeland Security believes it is.

For the past 18 months, immigration officials at border entries have been searching and seizing some citizens’ laptops, cellphones, and BlackBerry devices when they return from international trips.

In some cases, the officers go through the files while the traveler is standing there. In others, they take the device for several hours and download the hard drive’s content. After that, it’s unclear what happens to the data.

The Department of Homeland Security contends these searches and seizures of electronic files are vital to detecting terrorists and child pornographers. It also says it has the constitutional authority to do them without a warrant or probable cause.

But many people in the business community disagree, saying DHS is overstepping the Fourth Amendment bounds of permissible routine searches. Some are fighting for Congress to put limits on what can be searched and seized and what happens to the information that’s taken. The civil rights community says the laptop seizures are simply unconstitutional. They want DHS to stop the practice unless there’s at least reasonable suspicion.

Legal scholars say the issue raises the compelling and sometimes clashing interests of privacy rights and the need to protect the US from terrorists and child pornographers. The courts have long held that routine searches at the border are permissible, simply because they take place at the border. Opponents of the current policy say a laptop search is far from “routine.”

“A laptop can hold [the equivalent of] a major university’s library: It can contain your full life,” says Peter Swire, a professor of law at Ohio State University in Columbus. “The government’s never gotten to search your entire life, so this is unprecedented in scale what the government can get.”

In recent court challenges, lower courts have ruled that laptop searches at the border are reasonable, just like searches of a person’s baggage or other physical property. But the courts have drawn the line at personal, invasive searches, ruling that things like “strip searches, body-cavity searches, and involuntary X-ray searches” are nonroutine, according to Nathan Sales, a professor of law at George Mason University in Arlington, Va., who recently testified before Congress.

Thus, they require reasonable suspicion, probable cause, or a warrant.

Advocates of the current practice say that the contents of a laptop are like the contents of a suitcase, and as such, customs officials have every right to go through them. They also argue that requiring probable cause for laptop searches would create huge delays at the border and give criminals and terrorists an easy way to bring dangerous things into the country.

“The idea that we would create some kind of sanctuary for criminals and terrorists to carry things across the border to me is absolutely ludicrous,” says James Jay Carafano, a senior research fellow at the Heritage Foundation in Washington. “It’s also unrealistic to require probable cause when you think about the millions of people a day who come in and go out of the country.”

People who’ve had their laptops and other electronic devices searched and seized believe that it’s reasonable and constitutional to expect a higher level of suspicion before customs officials take their laptop.

Amir Khan, an information technology consultant from the San Francisco area, has had his laptop searched twice on returning to the US from business abroad. Once, a customs official took it away for more than two hours.

“I don’t know what he did with it. He could have planted malicious software or copied files,” Mr. Khan says. “It was very intrusive and I think unreasonable. The Fourth Amendment makes it clear you can’t just stop anybody in the street and start searching them and their things.”

Many people, particularly in the business community, also say that a laptop is more like a virtual office than a piece of baggage. In addition, they believe the government should be required to tell people what it does with the information it copies.

“Right now, [DHS] seems to believe that it can hold anything it wants from your laptop, BlackBerry, or cellphone indefinitely,” says Susan Gurley, executive director of the Association of Corporate Travel Executives in Alexandria, Va. “There are no limits on what they can do with it or whether they can share it with any third party.”

Ms. Gurley and others in the business community would like DHS to be required to come up with a set of rules that determine what can be done with the information and how long it can be held. Civil rights advocates would like to see Congress go even further and determine that a search of an electronic device is invasive and requires probable cause.

“We treat our laptops, BlackBerrys, and cellphones as an extension of our brains. They can contain our most intimate thoughts,” says Tim Sparapani, senior legislative counsel of the American Civil Liberties Union.

As for creating a “sanctuary” for terrorists to bring in lethal plans, Mr. Sparapani counters: “Any terrorist worth his or her salt would send that stuff in an encrypted file from a remote location to a remote server somewhere in the United States.”

In an e-mail, DHS says its officers “have the responsibility to check items such as laptops and other personal electronic devices to ensure that any item brought into the country complies with applicable law and is not a threat to the American public.”