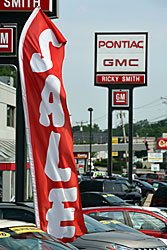 Shares of General Motors are trading at prices last seen in the 1950s.

(Consider that the Dollar today is worthless compared to 1950! – The Infinite Unknown)

America’s automobile industry may be facing the biggest turnaround challenge in its history, a problem punctuated Tuesday as the carmakers released monthly sales results.

Times were tough enough in Detroit before gasoline hit $4 per gallon, but in the past two months the outlook has taken a turn for the worse.

Shares of General Motors are trading at prices last seen in the 1950s, their value cut in half in just eight weeks. Ford and Chrysler are in even worse shape, analysts say.

The sobering implication: The Big Three may have to become the Big Two, and even survivors will have a tough road ahead.

Bankruptcy is not a near-term threat, but the three carmakers are fast burning through cash reserves. And while government assistance – or perhaps an energy policy that supports new automotive technologies – could become a lifeline, it can’t substitute for the hard work of transforming product lines.

“The rate of cash usage is alarming,” says Gregg Lemos Stein, an auto analyst at Standard & Poor’s in New York, which has put all three carmakers on “credit watch” to review the default risk on their debts. “They’ve never been lower than this,” he adds, referring to S&P’s current B rating on their debt.

The current debt ratings place the Detroit automakers in what’s known as “junk bond” status, below the typical quality range known as investment grade. The good news: Bankruptcy or default isn’t an imminent risk, Mr. Lemos Stein says, because the companies headed into this crisis with cash on hand.

But the credit watch, in place as of June 20, means that analysts are concerned about a deteriorating outlook.

“We believe all three companies currently have ample liquidity for at least the rest of 2008 as measured by cash balances, available bank facilities, and … unencumbered assets” that could be sold, S&P analysts said in their recent report.

The cash-flow problem could reach “undesirable” levels by the second half of next year, they said.

The Big Three have been under growing pressure for years. And in the early 1980s, they faced a similar crisis in which surging gasoline prices prompted a consumer shift toward smaller vehicles, even as a recession hammered sales.

In that era, the federal government bailed out Chrysler with a low-interest loan, and the company recovered by opening a large market for minivans as a family vehicle.

Now, the companies again face a recessionary sales climate, and a consumer shift away from large sport utility vehicles and pickups. Only now, the Big Three are much smaller than they used to be, as a share of the US market.

“We’re past the point of a minivan rescuing a company,” says Peter Morici, a University of Maryland economist who follows the industry. “We’re getting to the point with Ford and Chrysler where, if they get any smaller, they may not be viable… My guess is that one of these two companies will have to go away.”

GM has the advantage of being the largest of the three, in the range of its product lines and in global sales. But its struggles are evident in its stock price: A shareholder who bought in the 1950s would have lost lots of money, after inflation is factored in.

Even before the current slump deepened, rising competition was pushing all three carmakers to cut workers, close factories, and streamline the number of products for sale.

The problems include high labor costs and what analysts say was a failure to be ready with new products as gasoline prices began rising several years ago. Now executives in Detroit are coming to the conclusion that, in a world of rising demand for energy, high fuel prices are probably here to stay.

An agreement reached last year with the United Auto Workers union means that labor costs will be coming under better control. Starting in 2010, the burden of retiree healthcare shifts from the employers to a union-administered trust.

That could save GM $3 billion a year, for example.

The companies have a range of other options to make ends meet: selling assets, cutting dividends, borrowing more (Chrysler recently tapped a $2 billion credit line), and trying to find deep-pocket investors who believe in a turnaround.

Washington may also provide some help, though not necessarily with a direct bailout. The oil spike will make energy policy, including higher-mileage automobiles, a priority for whoever wins the White House. Democratic presidential candidate Barack Obama has proposed helping with the carmakers’ healthcare tab in exchange for new efforts in developing clean cars. And Republican candidate John McCain recently proposed a $300 million prize for whoever comes up with a leapfrog improvement in electric car batteries.

Ultimately, the survivors will need to find a way to put endless restructurings behind them. “The challenge and the elusive goal has been stabilizing market share,” Lemos Stein says.