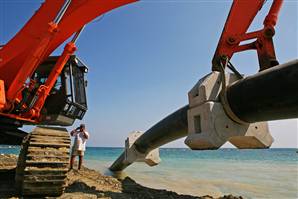 NICOSIA, Cyprus – A Greek tanker carrying about 1.76 million cubic feet of water arrived in the Cypriot port of Limassol on Monday to help the drought-stricken island replenish its dwindling water reserves.

The tanker is the first in a fleet of ships chartered by the Cypriot government at a cost of $65 million to provide water to towns now experiencing emergency rationing.

The main water pipelines have been turned on for only a few nights each week. And some residents, particularly those living in high-rise apartment blocks, have complained of not getting any water at all because pressure has been insufficient to push the water to rooftop storage tanks.

Cypriots have been forbidden to wash their cars or water their gardens. Underground water pumped from boreholes has also become scarce.

Alexander McCowan, a landscape gardener working for several foreign embassies and private estates in Nicosia, said many of the capital’s boreholes are now pumping mud.

“I installed one expensive garden with 500 meters (546 yards) of irrigation pipe in Nicosia a few months ago,” he said. “Last week they called to tell me the system had stopped and their trees and lawns were dying. I found that sludge had been pumped through the pipes and then solidified in the heat. It was like cement.”

Cypriot officials have voiced fears that tourism, one of the mainstays of the economy, might be adversely affected by the water shortages.

The tanker supply program will continue until the end of the year. The water will be pumped directly into the main water supply pipelines with any surplus going to the reservoirs.

Cyprus currently operates two desalination plants running at full capacity and a third is scheduled for completion later this year. The government is also considering plans to expand the search for underground water with giant drills reaching depths of approximately 875 yards.

In the past Cypriots have relied on prayers offered up in the island’s churches to provide rain.

But this year it rained only a few days in January and February. By March it became apparent that shortages would probably be severe and that the prayers wouldn’t help, so the government reluctantly introduced rationing.