Why it’s a lot worse than you think. 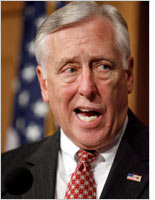 Sometime today, the Senate is likely to approve the most comprehensive overhaul of American surveillance law since the Watergate era. Unless you’re a government lawyer, a legal scholar, a masochist, or an insomniac, chances are you haven’t read the 114-page bill. Don’t beat yourself up: Neither have most of the 293 House members who voted for it last week. Ditto the mainstream press, who seem to have relied chiefly on summaries provided by the same lawmakers who hadn’t read it.

To be fair, wiretapping is so classified, and the language of the bill so opaque, that no one without a “top secret” clearance can say with any authority just how much surveillance the proposal will authorize the government to do. (The best assessment yet comes from former Justice Department official David Kris, who deems the legislation “so intricate” that it risks confusing even “the government officials who must apply it.”)

Out of the echo chamber of ignorance and self-serving political cant, a number of myths have begun to emerge. We may never know for sure everything that this new legislation entails. But here are a few things that it most certainly doesn’t.

Myth No. 1: This bill is a compromise.

The House bill “is the result of a compromise,” one of its architects, Steny Hoyer, D-Md., maintained the other day. But in truth, Hoyer and his colleagues gave the White House most of what it asked for, dramatically expanding the government’s surveillance capabilities without demanding any serious concessions in exchange. Sen. Russ Feingold, D-Wis., calls the deal “a capitulation,” and he’s right. Why else would the White House express its approval so quickly, after a full year in which President Bush petulantly vowed not to sign any legislation that obliged him to concede too much? Sen. Kit Bond, R-Mo., offered an honest appraisal: “I think the White House got a better deal than even they had hoped.”

Myth No. 2: We need the bill to intercept our enemies abroad.

One frequent refrain in favor of the new legislation is that without it, America’s intelligence capabilities will dry up, leaving the country vulnerable to attack. The National Security Agency wants to intercept communications that pass through routers in the United States, even when both parties to the communication are abroad. The administration has argued that the NSA should not have to obtain a court order to intercept those communications. Seems reasonable, right?

Of course it’s reasonable. So reasonable, in fact, that House Democrats proposed to fix the problem a year ago. They were rebuffed. Why? Because their plan contained too much judicial oversight. (They ended up folding, just as they have this time around.) So when people say that this legislation is all about exempting foreign-to-foreign communications that happen to pass through the United States from the warrant requirement, don’t buy it.

You see, the new law goes a lot further, basically doing away with warrants altogether in the domestic-to-international context. Under the proposal, the NSA can engage in what David Kris calls “vacuum cleaner surveillance” of phone calls and e-mails entering and leaving the United States through our nation’s telecom switches. Provided that the “target” of the surveillance is reasonably believed to be abroad, the NSA can intercept a massive volume of communications, which might, however incidentally, include yours. When authorities want to target purely domestic communications, they still have to apply for a warrant from the FISA court (albeit only after a weeklong grace period of warrantless surveillance). But where communications between the United States and another country are concerned, the secret court is relegated to a vestigial role, consulted on the soundness of the “targeting procedures,” but not on the legitimacy of the targets themselves.

This is a huge departure from FISA. As Glenn Greenwald argues in Salon, the underlying suggestion of the new proposal is “not that the FISA law is obsolete, but rather, that the key instrument imposed by the Founders to preserve basic liberty-warrants-is something that we must now abolish.”

Myth No. 3: The courts will still review the telecom cases.

Perhaps most controversially, the bill effectively pardons the telecom giants that assisted the Bush administration in the warrantless wiretapping program. They will now be shielded from dozens of civil lawsuits brought against them after their involvement was exposed. House Democrats insist that the telecoms are not automatically getting off the hook. Instead, the companies must go before a federal judge. But here’s the catch: For the suits against them to be “promptly dismissed,” they must demonstrate to the judge not that what they did was legal but only that the White House told them to do it.

This is another bit of face-saving window dressing, and its essence is best captured in a breathtaking remark from Sen. Bond: “I’m not here to say that the government is always right. But when the government tells you to do something, I’m sure you would all agree … that is something you need to do.” That more or less sums it up-one part Nuremberg defense, the other part Nixon.

Myth No. 4: The Democrats must fold because of the November election.

It’s no secret that congressional Democrats wanted to resolve the FISA debate before the August convention in order to avoid the perennial charge that they’re softies. After the House vote last week, Barack Obama issued a statement backing off his earlier tough stance on telecom immunity. The calculus seemed clear: McCain had just reversed his own position on illegal wiretapping and was spoiling for a fight, arguing that “House Democrats, the ACLU, and the trial lawyers have held up legislation to modernize our nation’s terrorist surveillance laws.” You can’t stand with the trial lawyers and the ACLU if you want to win a general election.

But does it really make sense to stand with AT&T and George W. Bush instead? As the Anonymous Liberal blogger pointed out, you could hardly ask for a more disreputable opposing team than a president with historic-low popularity and a bunch of corporate fat cats. And by reneging on his earlier position, Obama put himself in a box: If he lets the bill sail through the Senate, he will alienate his base. But if he attempts a filibuster or an amendment now, he will appear to be pandering to the objections of Moveon.org and other groups. It would have made more sense for the party leadership and the nominee to stick to their guns.

Myth No. 5: The law will be the “exclusive means” for surveillance.

The Democrats’ most pathetic bit of self-deluded posturing involves the inclusion of a clause suggesting that the new law represents the “exclusive means” by which “electronic surveillance and interception of certain communications may be conducted.” According to House Speaker Nancy Pelosi, D-Calif., this means “the law is the exclusive authority and not the whim of the president.” But, then, FISA always said that it was the “exclusive means.” And in 2001, pretty much on a whim, the president set it aside. So for those of you keeping score back home, the Democratic leadership is patting itself on the back for including in the new law a provision that was already in the old law-and which the Bush White House chose to ignore.

Here, then, is the bitter joke of the new legislation: From 2001 to 2007, the NSA engaged in a secret program that was a straightforward violation of America’s wiretapping laws. Since the program was revealed, the administration has succeeded in preventing the judiciary from making a definitive declaration that the wiretapping was a crime. Suits against the government get dismissed on state-secrets grounds, because while the program may have been illegal, it was also so highly classified that its legality can never be litigated in open court. And now suits against the telecoms will by dismissed en masse as well. Meanwhile, the new law moves the goal posts, taking illegal things the administration was doing and making them legal.

Whatever Hoyer and Pelosi-and even Obama-say, this amounts to a retroactive blessing of the illegal program, and historically it means that the country will probably be deprived of any rigorous assessment of what precisely the administration did between 2001 and 2007. No judge will have an opportunity to call the president’s willful violation of a federal statute a crime, and no landmark ruling by the courts can serve as a warning for future generations about government excesses in dangerous times. What’s more, because the proposal so completely plays into the Bush conception of executive power, it renders meaningless any of its own provisions. After all, if the main lesson of the wiretapping scandal is that we need more surveillance power for the government, what is to stop President Bush-or President Obama or President McCain-from one day choosing to set this new law aside, too? “How will we be judged?” Sen. Chris Dodd, D-Conn., asked in a stirring speech deploring the legislation yesterday. “The technical argument obscures the defining question: the rule of law, or the rule of men?”