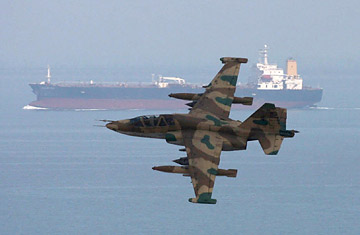 An aircraft of Iran’s elite Revolutionary Guards flying over an oil tanker in the Persian Gulf. AFP / Getty

If wasn’t clear before it should be now: the Bush Administration can’t afford to attack Iran. With gas already at $4 a gallon and rising almost every day, Iran figuratively and literally has the United States over a barrel. As much as the Administration is tempted, it is not about to test Iran’s promise to “explode” the Middle East if it is attacked.

The Iranians haven’t been shy about making clear what’s at stake. If the U.S. or Israel so much as drops a bomb on one of its reactors or its military training camps, Iran will shut down Gulf oil exports by launching a barrage of Chinese Silkworm missiles on tankers in the Strait of Hormuz and Arab oil facilities. In the worst case scenario, seventeen million barrels of oil would come off world markets.

One oil speculator told me that oil would hit $200 a barrel within minutes. But Iran’s official news agency, Fars, puts it at $300 a barrel. I asked him if Iran is right, what does that mean?

“Four-dollar-a-gallon of gasoline only reflects $100 oil because the refiners’ margins are squeezed,” he said. “At $300, you have $12 a gallon of gasoline and riots in Newark, Los Angeles, Harlem, Oakland, Cleveland, Detroit, Dallas.”

In either case, whether at $200 or $300, Bush does not want to be the President who leaves the White House on a mule-drawn cart. But Iran’s blackmail is not just about oil. The Iranians truly believe they have us hostage in Iraq – our supply lines, the acquiescence of the Shi’a in the occupation. It would all change in an instant, though, especially if we were to borrow Iraq to attack Iran. The way Fars put it: “In Iraq, fighters would rise up in solidarity with each other and begin … making the Tet Offensive in 1968 Vietnam.”

If this all sounds very alarming, Iran meant it to, and it seems to be working. On Tuesday Bush was talking about the prospect of new sanctions rather than attacking.

Which leaves Israel. Are the Israelis, who have a lot more on their minds than the price of gas in the United States, going to launch a pre-emptive attack? One hard and fast rule in the Middle East is never rule out Israel’s readiness to turn the table over. But an Israeli hawk on Iran, with close ties to Israel’s Ministry of Defense, told me to forget about it. “There’s not a chance Israel will do anything. Maybe there’s a window after the American elections and the new President but even that’s doubtful. Washington does not have the stomach for another war.”

Israel cannot attack or contain Iran on its own; it needs the full military might of the United States behind it. So in the meantime Israel can only huff and puff, hoping new sanctions on Iran will do the trick.