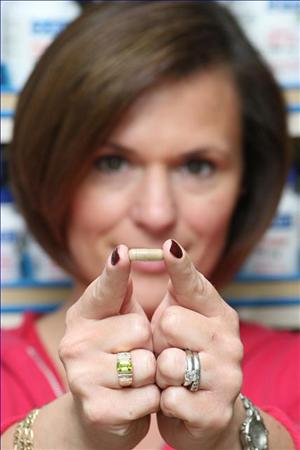 Cindy King, owner of Natural Sequence, displays a capsule of Valerian, a natural relaxant and sleep remedy. Valerian is one of many products sold by natural food stores that face regulations under a proposed bill by the federal government.

Natural food vendors in Canada may have to turn to their own shelves in search of a stress remedy as bill C-51 awaits its second reading in Parliament.

The federal government says the bill is designed to prevent problems from the use of vitamins and natural remedies. However, the natural foods industry says the bill’s intentions are purely for profit.

“The health food industry is growing constantly and I think we are taking a piece of the pie from big pharma,” said Cindy King, who owns Natural Sequence, a natural food store located in Trenton. “Big pharma and government go hand-in-hand.”

If the bill is made into law, manufacturers will be required to report incidents of their products causing harm within one week. The government will increase surveillance of products already on the market and will have the ability to rapidly recall consumer products. Fines for putting consumers at risk will increase from a $5,000 maximum to $5 million.

“The bill is worded in ways that will allow them to have more control then they are letting on,” King said. “They are being sneaky.”

While King agrees regulations should be in place for consumer safety, she says the bill takes away constitutional rights to freely choose how a person treats a disease.

“They would rather see us sick and use the system to create more dollars for big pharma,” King said.

Many of the people who are against the bill believe vitamins will be put into a prescription category resulting in 40 to 60 per cent of health food products being pulled from shelves.

“That’s not great for business. Being in a small area that would definitely hurt,” King said.

King has collected more than 200 signatures opposing the bill and has sent the petition to Northumberland-Quinte West Mp Rick Norlock.