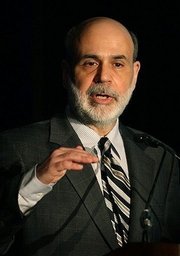 Federal Reserve chairman Ben Bernanke, in unusually sharp comments on foreign exchange, said Tuesday the central bank is “attentive” to the sagging dollar because of its potential impact on inflation.

Bernanke, speaking via satellite to a monetary conference in Barcelona, Spain, offered a mixed assessment of US economic conditions, while highlighting concerns about inflation and the dollar.

His comments on currency marked a first for Bernanke, who normally defers to the Treasury on such matters.

“The challenges that out economy has faced over the past year or so have generated some downward pressure on the foreign exchange value of the dollar, which have contributed to the unwelcome rise in import prices and consumer price inflation,” he said, according to the text of the remarks released in Washington.

The Fed’s dual mandate is to maintain price stability and promote maximum employment in the US economy.

Bernanke maintained that “the Federal Reserve’s commitment to both price stability and maximum sustainable employment … will be key factors ensuring that the dollar remains a strong and stable currency.”

The greenback strengthened after the comments, with the euro falling to 1.5449 dollars from 1.5540 in New York late on Monday.

Bernanke noted that “in collaboration with our colleagues at the Treasury, we continue to carefully monitor developments in foreign exchange markets.”

“This should mean the (Fed) is concerned about the lower value of the currency on inflation and thus the likely reluctance of the interest rate setting body to lower interest rates further. And perhaps signals that rates are poised to be raised in the future due to inflation.”

Robert Brusca at FAO Economics said the Fed chief “unexpectedly highlighted the dollar and tilted more than they had recently to warn on the inflation front. Markets are reacting to this as you might expect.”

The dollar has been slumping against other major currencies, especially the euro, as the Fed has slashed its base rate from 5.25 percent last September to 2.0 percent. The European Central Bank meanwhile has been holding its base rate at 4.0 percent, making the euro more attractive for investors.

While Bernanke made no specific comment on the Fed’s next move, he suggested there would be no immediate interest rate cuts: “For now, policy seems well positioned to promote moderate growth and price stability over time. We will, of course, be watching the evolving situation closely and are prepared to act as needed to meet our dual mandate.”

On the overall US economic outlook, Bernanke said activity remains sluggish but is poised to rebound. However he said the rebound remains dependent on a recovery in the troubled housing market and some stability in energy prices.

“Activity during the current quarter is also likely to be relatively weak,” he said.

“We may see somewhat better economic conditions during the second half of 2008, reflecting the effects of monetary and fiscal stimulus, reduced drag from residential construction, further progress in the repair of financial and credit markets, and still solid demand from abroad.”

He added that the Fed sees growth “picking up further in 2009,” but cautioned that “until the housing market, and particularly house prices, shows clearer signs of stabilization, growth risks will remain to the downside. Recent increases in oil prices pose additional downside risks to growth.”