Ban said the U.N and all members of the international community were very concerned and immediate action was needed.

He spoke to reporters at U.N. offices in Austria, where he was meeting with the nation’s top leaders for talks on how the United Nations and European Union can forge closer ties.

“This steeply rising price of food — it has developed into a real global crisis,” Ban said, adding that the World Food Program has made an urgent appeal for additional $755 million.

“The United Nations is very much concerned, as (are) all other members of the international community,” Ban said. “We must take immediate action in a concerted way.” 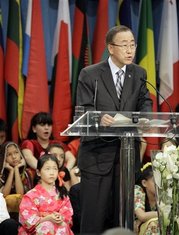 Ban urged leaders of the international community to sit down together on an “urgent basis” to discuss how to improve economic distribution systems and promote the production of agricultural products.

An estimated 40 percent increase in food prices since last year has sparked violent protests in the Caribbean, Africa and South Asia.

Josette Sheeran, the World Food Program’s executive director, has likened the price increases to a “silent tsunami,” and said requests for food aid are coming in from countries unable to cope with the rising prices.

She noted that the price of rice has more than doubled since March. The World Bank estimates that food prices have increased by 83 percent in three years.