Adm. Michael Mullen, chairman of the Joint Chiefs of Staff, said that the Pentagon is planning “potential” military actions against Iran, reports The Washington Post. 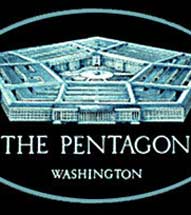 Addressing concerns about the US military’s capability of dealing with yet another conflict at a time when forces are purportedly stretched thin, Mullen said war with Iran “would be ‘extremely stressing’ but not impossible for U.S. forces, pointing specifically to reserve capabilities in the Navy and Air Force,” Tyson notes.

“It would be a mistake to think that we are out of combat capability,” she quotes the U.S.’s top military leader at a Pentagon news conference.

A prior incident involving U.S. forces in the Strait of Hormuz and Iranian speedboats in January of this year–which Republican White House candidates used (with the notable exception of Ron Paul) as a saber-rattling opportunity during a nationally-televised debate–was later discredited as a virtual fabrication.

…Mullen made clear that he prefers a diplomatic solution to the tensions with Iran and does not foresee any imminent military action. “I have no expectations that we’re going to get into a conflict with Iran in the immediate future,” he said.

Mullen’s statements and others by Defense Secretary Robert M. Gates recently signal a new rhetorical onslaught by the Bush administration against Iran, amid what officials say is increased Iranian provision of weapons, training and financing to Iraqi groups that are attacking and killing Americans.

In a speech Monday at West Point, Gates said Iran “is hell-bent on acquiring nuclear weapons.” He said a war with Iran would be “disastrous on a number of levels. But the military option must be kept on the table given the destabilizing policies of the regime and the risks inherent in a future Iranian nuclear threat.”

Army Gen. David H. Petraeus, the top U.S. commander in Iraq, who was nominated this week to head all U.S. forces in the Middle East, is preparing a briefing soon to lay out detailed evidence of increased Iranian involvement in Iraq, Mullen said. The briefing will detail, for example, the discovery in Iraq of weapons that were very recently manufactured in Iran, he said.