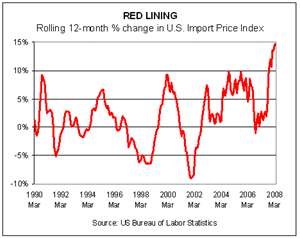 And if we add energy back to the mix, import prices are, well, let’s just say they’re skyrocketing.

It should be obvious to everyone that the current scenario can’t last. Something, as they say, has to give. Among the possible scenarios:

1) The Federal Reserve will say enough’s enough and pull a Volcker and hike rates. Of course, at this point in the cycle that decision would exacerbate the already weakened economy, although it probably would take the edge off import prices by more than a little.

2) The economy will weaken of its own accord, doing the Fed’s dirty work without the political blowback that would arise if the central bank took the lead. In that case, tempering import prices seems inevitable if energy costs merely stay flat, although a drop of oil prices to, say, $80 a barrel would have a huge soothing effect on import price calculations in the near term.

Given that this is a presidential election year, the odds for #1 look dim. As for the medium and longer terms, there’s reason to wonder if a new era of global inflation has begun, as the new IMF outlook for the world economy suggests. No, a return of the 1970s isn’t likely, short of a colossal failure of policy makers. We’ve learned a thing or two over the decades, and one of them is that central banks do, in fact, have a large influence over inflation rates. Of course, that assumes central bankers will act decisively, but that’s another matter. The central lesson of the 1970s was that the Fed stumbled in keeping inflation in check. Presumably, that mistake won’t be repeated, at least not intentionally. Still, considering monetary policy over the past year or so, one wouldn’t be out of line in expecting inflation of a somewhat higher level to prevail.

Yes, an interruption in the new era of inflation may be coming, depending on what happens in the global economy. It wouldn’t take much on the marginal-demand front to deflate the oil bubble a bit from current levels, which would go a long way in pushing pricing benchmarks down.

But the underlying forces that are pushing commodity prices higher are fundamentally driven, which is to say a combination of rising demand and supply that hasn’t been able to keep up, at least so far. Some of the pricing pressure is related to central banking missteps. To the extent that monetary policy can be improved in the months and years ahead, inflationary pressures will fall, or at least stop rising. But the fundamental catalysts behind higher prices are immune to central banks, and there’s reason to think that these fundamental forces will be harassing the global economy for some time.