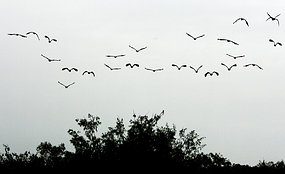 Every year in April and March around Australia, millions of birds get ready to launch on their 10,000-kilometre flight to the northern hemisphere.

Some of these species do this epic journey non-stop to destinations including northern China, Mongolia, Siberia and Alaska, but scientists have been doing the numbers and are witnessing a disturbing trend.

The University of New South Wales’ Richard Kingsford is a co-author of the report and an avid birdwatcher.

“What we found was that for the migratory shore birds, there’s been a 73 per cent decline over the 25 years that we’ve been looking at it. But the same thing was happening with the Australian residents as well,” he said.

The birds on the decline include about 36 migratory species, as well 15 types that reside in Australia.

“I’ve been astounded at the severity of declines. I mean, losing 75 per cent of a particular species spells long-term disaster really for that species,” Dr Kingsford said.

The problem is the wetlands and the resting places they rely on for food and recuperation along the migratory path are disappearing.

“As these species wing their way on this incredible 10,000-kilometre journey up to the northern hemisphere, they’re exhausted mid-flight when they get to the east coast of Asia and one of the major places, what we call staging points, is the Yellow Sea off China,” he said.

“What we’ve seen is nearly a third of the tidal habitat there, the feeding grounds for these birds to recuperate, has been lost with agricultural development and general encroachment. So we’re seeing them essentially being squeezed from both ends.”

While Australia has a number of conservation agreements with Japan, Korea and China to protect these migratory species, they don’t appear to be translating to conservation.

Birds Australia conservation group spokesman Graeme Hamilton says obligations must be met from either side if these millions of bird species are to survive.

“I think its one of our great weaknesses in most agreements and most legislation that you can say, okay, these things are protected,” he said.

But then when it comes down to actually measuring to what degree they’re protected and really measuring what success means, we don’t do it.”